Review -- Nine Rules to Break When Romancing a Rake 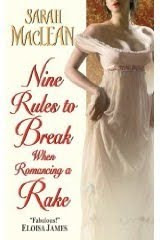 “What if she could live a life other than the staid, boring mockery of one that she currently lived? What if she could do all the things that she would never dream of doing? What was to keep her from taking such a leap?

At twenty-eight, no one much thought about her. Her reputation had been impeccable for years – for all the years that it had mattered that she retain such an untarnished name. It wasn’t as if she were about to traipse off and completely destroy that reputation, anyway. She wasn’t going to do anything that a well-respected male member of the ton wouldn’t do on any given day without a second thought. And if they could, why shouldn’t she?”

During her first season, young Lady Calpurnia Hartwell quickly comes to the conclusion that she will never be the belle of the ball. No, she is not the type to sparkle amidst a sea of beautiful ladies of the ton. While she exudes grace and elegance, acknowledged by the entire ton, everyone knows she is not a beauty by their standards. Disheartened by her prospects of impoverished, aged, and deadly dull male companions, Callie escapes the crush of a ball for the cooler air of a garden and stumbles upon the Marquess of Ralston, who in turn gives Callie a pep talk that includes complimenting her on her unusual name. Starry-eyed by a secluded conversation with a renowned rake, Callie returns to the ball with her head held high.

Ten years later, Callie is still a single woman. Bored with the staid, confined life of a spinster woman, Callie laments to her brother, the Earl of Allendale, about the double standard of the ton. Single men have much more freedom than single woman and it is just not fair! Her brother proves to be very supportive and encourages Callie to enjoy some lively activities that will not cause much of a ripple in the waters of the ton. Later, as Callie ponders her conversation with her brother, she burns her lace cap (ala the bra burnings of the women’s lib movement in 1960s) and composes a list of nine things she would love to do if she had the courage and more so the opportunity.

Kiss someone – passionately
Smoke cheroot and drink scotch
Ride astride
Fence
Attend a duel
Fire a pistol
Gamble (at a gentleman’s club)
Dance every dance at a ball
Be considered beautiful. Just once.

Determined to mark the first item off of her wish list, Callie journeys in the dead of night to Ralston House, the home of the Marquess of Ralston, the man she has loved from afar for ten years, and quite meekly requests a kiss from him.

Amused by the quiet, wallflower standing in his bedchamber in the middle of night requesting a kiss, Gabriel St. John, The Marquess of Ralston, quickly analyzes the situation and proposes a trade of sorts. In exchange for a passionate kiss, Callie will serve as Gabriel’s newly discovered half-sister’s proper sponsor for entry into society. With Callie’s impeccable reputation, Gabriel feels certain his new half-sister will have an easier time adjusting to life among the ton. Callie agrees to this unique transaction with an amendment of an additional favor of her choosing in the future. Sealing their deal with a small kiss, Callie informs Gabriel that she is quite satisfied with the peck, to which Gabriel responds:

“His lips curved at her ear as he spoke, his harsh breathing making the words more a caress than a sound, “Kisses should not leave you satisfied.”

He returned his lips to her, claiming her mouth again, robbing her of all thought with a rich, heady caress. All she wanted was to be closer to him, to be held more firmly. And, as though he could read her thoughts, he gathered her closer, deepening the kiss. His heat consumed her; his soft, teasing lips seemed to know all of her secrets.

When he lifted his mouth from hers, she had lost all strength. His next words pierced through her sensual haze.

“They should leave you wanting.”

And let me tell you this is just one of many scenes that leave you wanting more!!! The dynamic yin and yang relationship between Callie and Gabriel is superbly written. Ms. MacLean had me cheering for Callie from the very beginning of the book. While it speaks well of Callie for following the rules of society and I totally understand her reasons for doing so, I was elated to see her throw caution to the wind and enjoy life to the fullest.

Gabriel is an incredible hero, who shows his heroine that life needs to be a rewarding, delightful experience every single day. I loved how he encourages Callie to do things on her list, even extracting a promise from her that she only tries those things while in his presence. A rake has to feel like he is always in control. LOL! But as Gabriel falls for Callie, he realizes he has lost all control when it comes to her and nothing and no one will come between him and his woman.

I just can’t say enough about this novel. I am so excited to have found another author who has exceeded my expectations, and I do predict that Ms. MacLean will have a very long and fruitful future in the romance novel industry. Hopefully, Ms. MacLean's next books will be for Gabriel’s twin brother, Nick, and his newly discovered half sister, Juliana, both of whom truly deserve their own story.

Be sure to put this book at the VERY TOP of your TBR pile because it deserves that coveted spot! 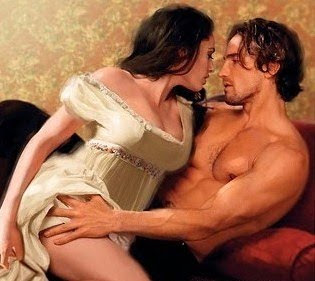 And look, even the stepback is scrumptious!
Posted by Buffie at 12:01 AM