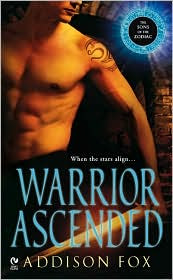 Reading a new book by a debut author is always a treat, but when it's the beginning of a series it's like discovering buried treasure. And Warrior Ascended by Addison Fox is quite a find.

Millenia ago, Themis, the goddess of Justice, created a race of fierce warriors, each imbued with a special power of the zodiac and charged with protecting humanity from the darkest of evils.

Themis makes a bargain with her former husband, Zeus, to create her special band of warriors. He reluctantly agrees with the proviso that there must be a balance of good and evil. His daughter (with Hera) Enyo, goddess of war, will be allowed to battle Themis' warriors. For every battle she loses, her power will diminish, but Themis knows her warriors will need all the strength and cunning she gives them to prevail.

Leo warrior Brody Talbot is preparing for what might be the toughest battle of his immortal life. Enyo is planning to obtain the Summoning Stones of Egypt and use their power to destroy humanity. Brody is in Egypt when an unknown chamber of Thutmose III is unearthed and the prophecy is revealed. He must head to New York to find the woman whose fate is tied to the prophecy and protect her from an evil she cannot begin to fathom.

Ava Harrison is a curator at New York's American Museum of Natural History, and she is in charge of the creme de la creme of exhibits: the display of the Summoning Stones. Ava's father was a renowned archaeologist who was murdered when she was a child. She has done her best to continue his work, but not in the field. Understandably traumatized by her father's death, Ava has immersed herself in her work, hiding behind drab, baggy clothes. This creates for her an illusion of safety and security. But when the museum brings in a very sexy archaeologist--Brody-- to work with her, Ava's safe little world is forever turned upside down.


"I know what it is. To be separate from others. It gets lonely. Much of it's been my fault, but I've isolated myself from others, some of it by circumstance and sometimes by choice. I rarely connect with others. Rarely match with anyone. Family. Friend. Lover. And I guess I just see something in you that reminds me of that."


Brody jumped right off the page and stole my heart. He is an alpha hero with a capital 'A', but under that tough exterior lies a tender heart that beats for his mate, Ava. She is a smart, capable woman, but she has been hurt by so much, and she wears her frumpy clothes like a suit of armor to protect herself. Her instant attraction to Brody surprises her--her experience with men is very limited--but Brody charms her and breaks through her defenses and wins her love and trust. He helps her realize how strong she truly is, and most of all that she is worthy of love. And it just doesn't get much better than that.


She was truly his match. He'd spent thousands of years walking the earth. He had met ten times as many women and had always known their presence would be transient. And none of them, not even his sweet first love, fired his blood and filled his soul.

Consequences be damned, he could no longer stand not having her, this woman he needed above all others.

So he'd make his choice. And he'd take what he could have. And the glory of being with her could carry him through the rest of his immortal life, long after he walked the earth without her.


Run, don't walk, to your nearest bookstore and get a copy of Warrior Ascended and escape to a world of mythology, action, mystery and eternal love. And if you become immediately addicted to this series like me, stay tuned for Warrior Avenged, book 2. It's all about Kane Montague, the sexy Scorpio warrior who was double-crossed by a secret agent named Ilsa (see Warrior Ascended). Bring on the Warriors!