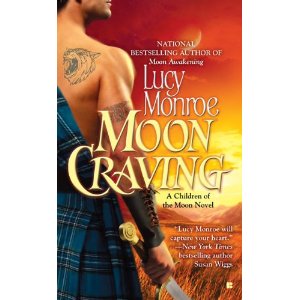 Laird of the Sinclair clan and alpha of his Chrechte wolf pack, Talorc has resigned himself to the fact that, in order to prevent war, he must marry the English woman his king has chosen for him. Having already rejected one English bride sent by his king, he knows he has no choice but to accept this one, even though it means forever giving up his dream of a true, Chrechte mate – one who would share both his human side and that of his inner wolf - for he has learned the hard way that he must never share the secret of the Chrechte with the human woman who will share his life.

Cruelly rejected by her mother since losing her hearing to a fever as a young girl, Abigail has known love and acceptance from only one person – her older step-sister, Emily. It was Emily who taught Abigail how to read lips and how to continue speaking normally even though she could no longer hear the words and Emily who helped her keep the secret of her deafness from those who would ridicule her. But Emily was married off to a Scotsman and for three years, Abigail has been alone in her silent world. Now she learns that she too is to be married off to a Scotsman, the very one who rejected her sister before Emily was kidnapped by the man who is now her husband. Though Abigail has no wish to be married, she recognizes that this may be her only opportunity to escape her mother’s cruelty and be reunited with her beloved sister, for once Talorc learns her secret, he will surely wish to be rid of her.

Though both have approached their marriage with reluctance, the attraction and desire between Talorc and Abigail is immediate and mutual and as they settle into their new life in Scotland, an emotional attachment between them begins to deepen. Though Abigail still wishes to see her sister, she no longer wants to leave Talorc and knows she must not let him discover her deafness. However, the secrets that they are both keeping, plus his clan’s mistrust of the English, threaten to undermine the love that they are only beginning to acknowledge and when those secrets come to light, the enormous sense of betrayal may be too much for them to overcome.

This is the first book I’ve read by Lucy Monroe and I enjoyed it immensely. While it is definitely a paranormal historical, with the Chrechte shape-shifting from human to wolf, I found the paranormal elements to be light with the love story being the primary focus of the book. As a bonus, it’s set in medieval Scotland, one of my favorite locations and periods. I found Abigail’s ability to function in a hearing world believable and was glad Monroe injected realism by not making it too easy for her. The interactions between Talorc and his inner wolf were fascinating and, again, totally believable to me. I enjoyed the humorous touches, such as Abigail’s misunderstanding of the word “mate”, and the sigh-worthy, emotional and very sensuous love scenes between Abigail and Talorc.

There is also a secondary (male/male) love story within the book, not typical in the romances I usually read, that is written with sensitivity and acceptance. Both characters are very likeable and I wanted their happy ending just as much as I wanted one for the hero and heroine.

The only detraction, for me, was the author’s occasional use of what I perceive as “modern” language.  Words such as “okay” and “wow” and phrases such as “Abigail was still lady of the keep. Full stop. Period.” They were jarring and had a tendency to pull me from the story but, thankfully, Monroe’s characters pulled me right back in. Overall, I found Moon Craving to be an enjoyable, very satisfying story and I look forward to reading more from this talented author.