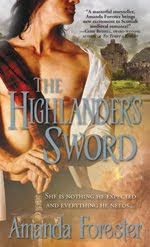 Anyone who knows me realizes that I'm a sucker for a Scottish romance and when there's a brawny Highlander on the cover...well, bring it on! Debut author Amanda Forester has written a charming medieval romance set in the Highlands, filled with warring clans, a hastily arranged marriage and topped off with liberal dose of humor.

Padyn MacClaren has recently returned to his home in Scotland after fighting the English in France. Since his French fiancee betrayed him to the English, he is determined never to trust another woman and risk betrayal again. This battle-scarred knight returns to his estate with his friend and fellow knight, Frenchman Sir Chaumont, ready to assume leadership of his clan. But his estate has been badly neglected and he needs money and land, something he is lacking. So he agrees to marry the only daughter--and heir-- to Lord Graham of Dundaff.

Lady Aila Graham is destined for the convent, so when her father informs her that she will be marrying Padyn MacClaren immediately, the safe, quiet life she planned on is irrevocably changed. Yet she has no choice but to do as she is told. She is intrigued by Padyn and finds herself drawn to him--he was a friend of her brother, who died in battle, so she remembers Padyn when he was younger--in spite of his stern demeanor and warrior's countenance. Once she resigns herself to this marriage, she is determined to win Padyn's love and trust, but that will be much harder than she imagines.


Aila pondered his words, more clearly understanding his distrust of women. He would forever carry the visible reminder of the last woman who betrayed him. Other scars were not as visible but deeper and more painful. How could she ever gain his trust?


Ms. Forester has penned a comedy of errors that had me laughing out loud. Due to a series miscommunications and the evil machinations of a traitor, Padyn and Aila spend most of the book struggling to find a place and the privacy to consummate their marriage. Along the way they grow to trust one another and learn that love does indeed conquer all. Filled with a cast of entertaining secondary characters and the mystery of the traitor's identity, The Highlander's Sword is the perfect read if you're in the mood for a little escape. Aye, the Highlands are calling.