Here at The Romance Dish, we love to talk about romance and add books to our TBB lists and TBR piles. So we're starting a new monthly feature spotlighting some upcoming releases that we are looking forward to and so should you! Time to mark your calendars and make your reservations for these upcoming April releases! 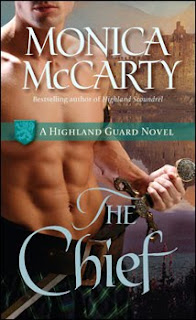 The Chief by Monica McCarty

The ultimate Highland warlord and a swordsman without equal, Tor MacLeod has no intention of being drawn into Scotland’s war. Dedicated to his clan, the fiercely independent chief answers to no one—especially not his alluring new bride, bartered to him in a bid to secure his agreement to command the deadliest fighting force the world has ever seen. The treacherous chit who made her way to his bed may have won his hand, but she will never claim his heart.

Although her husband’s reputation is as fierce as his manner, Christina Fraser believes something softer hides beneath his brutal shell. But the only warmth she feels is in their bed, in the glorious moments of white-hot desire that disappear with the dawn. When Christina’s reckless bid to win her husband’s love goes awry and thrusts them into danger on the eve of war against England, Tor will face his ultimate battle: to save his wife and open his heart—before it’s too late.

In Scandal They Wed by Sophie Jordan 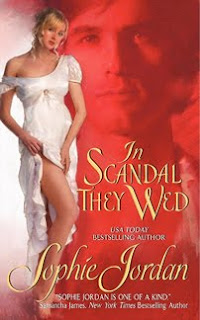 What kind of woman would marry a man she just met? A woman with nothing to lose.

Long ago, Evelyn Cross sacrificed her good name, her freedom, and any hope for love. Now, in the remote English countryside, she struggles to survive and avoid the scandal threatening to destry all she holds dear…until a sinfully handsome viscount arrives on her doorstep, offering marriage, salvation, and tempting her with so much more.

What kind of man would marry a woman he just met? The kind bound by duty.

Fresh from the war, Spencer Lockhart returns home to claim his title and right the wrong his cousin perpetrated upon Evelyn Cross. In need of a wife, marrying her is a small price to pay for duty. But When he meets her, the fiery chit is not what he expects to find in a ruined lady. As desire flares hotly between them, honor is the last thing on his mind…

What kind of man and woman would marry when they’ve only jet met? The kind who could ignite a scandal with just one touch. 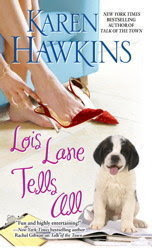 Susan Collins always wanted to be a hard-hitting reporter, but there’s not much call for her talents in sleepy Glory, North Carolina. Then the Murder Mystery Club—a trio of enterprising octogenarians—decides to open their own CSI lab at the assisted-living center. And when strange "accidents" begin to happen around town, Susan senses she could be on to the news story of her dreams.

Mark Tremayne has returned to Glory to take over as CFO of The Glory Examiner. His job is to keep the newspaper profitable, which means covering the annual Baptist Church Bake-Off and selling ads for the county fair—not allowing his too-sexy-for-her-own-good reporter to hare off after a wild story that could alienate some of the townspeople.

Mark’s and Susan’s viewpoints could be from different planets, but their mutual attraction is in total alignment. Despite their arguments, the indomitable redhead and the hot accountant are a sexual explosion waiting to happen. And when it does, Glory had better watch out!

Desires of a Perfect Lady by Victoria Alexander 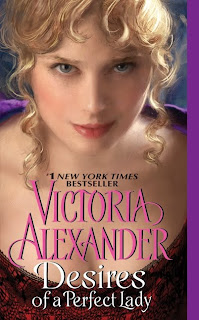 A secret list of the desires of Lady Olivia Rathbourne:

*Disregard convention
*Follow my heart
*Bed the Earl of Wyldewood

A decade ago, Olivia had expected to marry the Earl of Wyldewood, only to have happiness stolen from her before his ring could be placed upon her finger. Now he stands before her, as proud and arrogant and handsome as ever, vowing to rescue her. Well, he's got some nerve urning up after all these years. Where was he when she needed him?

As for the earl, scandal has never touched him nor has impropriety ever besmirched his name. But his penchant for doing the expected does have his family calling him, well, dull. Isn't it time to flaunt society's conventions and do what he's always wanted? And first on his list: Olivia in his bed—with or without a wedding.

Something Scandalous by Christie Kelley

Raised as the youngest daughter of the Duke of Kendal, Elizabeth learns a devastating truth on his deathbed: he wasn’t her father at all. And because the Duke had no sons, his title and fortune must go to his only male heir: a distant cousin who left England for America long ago. Anticipating the man’s imminent occupation of her home, Elizabeth anxiously searches for her mother’s diary, and the secret of her paternity...

Arriving in London with his seven siblings, William Atherton intends to sell everything and return to his beloved Virginia farm, and his fiancée, as quickly as possible. But as Elizabeth shows William an England he never knew, and graciously introduces his siblings to London society, it becomes clear the two are meant for each other. Soon, Elizabeth finds herself determined to seduce the man who can save not only her family name, but her heart...
Posted by Andrea at 12:02 AM