In addition to writing and teaching writing, historical fiction author Donna Russo Morin has worked in modeling and acting since she was 17, and has worked in marketing and advertising for large corporations and small non-profit arts organizations. Her short stories, book reviews, and articles have been published in critically acclaimed anthologies, newspapers, magazines, and ezines nationwide. Her first novel, The Courtier's Secret, was published in February of 2009. Her second, The Secret of the Glass, released this week, March 1. (See PJ's review below.)  She is currently hard at work on her third historical fiction work, tentatively titled To Serve a King. Her goal is to release a book a year for the next twenty years. What an amazing goal! Please help us welcome Donna to The Romance Dish as she asks.... 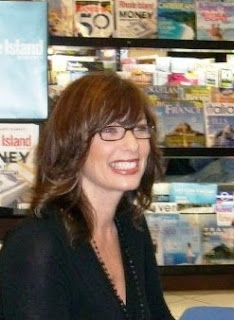 Like so much of life, the inspiration for my second book came to me when I was least looking for it.

I had always been a fan of Katie Couric through the many years she worked on the Today Show. So when she was appointed as the anchor of the CBS Evening News, I tuned in despite my typical aversion to television news programs, feeling a gesture of camaraderie and sisterhood for a woman trying to break boundaries. How could I know that just a few weeks into her tenure, a two minute story would provide me incredible fodder for my second book?

It was a feature story about the glassmakers of Murano. While other countries were vainly attempting to imitate the artistry of the centuries old craft, few had come close to revealing the secret of the glass—the particular formula that made Murano glass so exceptional. Laced throughout the story were snippets of Murano glassmaking history. One point in particular caught and captured my imagination: for hundreds of years the glassmakers of Venice were virtual prisoners in their own land, captives of their government, a powerful republic determined to keep the prestige and the profit produced by the glass for themselves.

The percussion of inspiration in my mind was as loud as a foghorn blast in the middle of starkly still night. Within a half hour of viewing the story, I had a two page synopsis written, a complete plot mapped out about a young Murano woman who must somehow save herself while protecting the ‘secret of the glass,’ a phrase that would become the title of my second book.

Other than what I had gleaned from the news, I knew little of Venetian history and that of the glassmakers, though I was enthusiastic to begin my research. Always a favorite part of the process for me, the subject matter would also take me to the land of my ancestors (of full Italian descent, I am but a second generation American as proud of the land of my antecedents as I am of my homeland). Having spent the previous year researching France for work on my first book (The Courtier’s Secret, Kensington, Feb. 09), I couldn’t wait for my time in Venice.

And there, between the pages that brought the old world to life, I found Galileo. I was unaware of how much time he had spent in the magical city, unaware how prominently the land figured into his story and he in Venice’s. I was astounded when I learned that, like myself, the professor suffered from a chronic illness. The more I read, the more convinced I became that, had the astronomer been privy to modern day medicine, his diagnosis would have been auto-immune, like my own. I found kinship in his tale of determination, one echoed in the story of the land itself and the people that had made it so unique.

It became a daily thrill to tell their story, to give breath to these marvelous characters. On every page are the words their inspiration gave to me.

Tell me who inspires you and why and enter to win a copy of my latest release, THE SECRET OF THE GLASS.

The Secret of the Glass 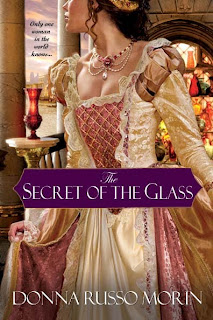 At the dawn of the 17th Century, Murano glass-makers are celebrated, revered, and imprisoned by the Venetian government. Sophia Fiolario, the daughter of a glass making maestro, has no desire for marriage, finding her serenity in the love of her family and the beauty of the glass. She learns of its secrets at her father’s side, where a woman has no right to be. But the life Sophia loves is threatened and she’s thrust into the opulent world of the Venice court, becoming embroiled in the scheming machinations of the courtiers’ lives. The beauty of Venice, the magnificence of the Doge’s Palace, can only be rivaled by the intrigue and danger that festers behind their splendid facades. As she searches for an escape, she finds the arms of another, a man whose own desperate situation is yet another obstacle in their path.

Amidst political and religious intrigue, the scientific furor ignited by Galileo, and even murder, Sophia must do anything to protect herself, her family…and the secret of the glass.

And here is an excerpt from THE SECRET OF THE GLASS:

Time was running short; the glass was getting harder and harder to contort with gentle guidance. Already its form was a visual masterpiece, the delicate base, the long, fragile flute, the bowl a perfect symmetrical shape. Her hands flew, creating the waves on the rim, capturing the essence of fluidity to the rapidly solidifying form.

With a deep sigh, an exhalation of pure satisfaction, Sophia straightened her curled shoulders, bending her head from side to side to stretch the tense neck muscles, tight from so long in one position. She studied the piece before her, daring to peek at her father. In his glowing eyes, his shining pride, she saw confirmation of what she herself felt, already this was a remarkable piece…but it was not done yet.

“Now you will add our special touch, sì?” her father asked as he retrieved the special, smaller pinchers from another scagno.

Sophia smiled with indulgence. Keeping alive the delusion for her father was yet another small price to pay him. The technique she would do next, the a morise, to lay miniscule strands of colored glass in a pattern on this base blown piece, had made their fabbrica famous. Since its release to the public, her father had reveled in the accolades he received over its genius and beauty. Her father had never, could never, reveal that the invention had been Sophia’s.

“Sì, Papa.” Sophia lay down the larger tongs, flexing the tight muscles of her hands. She gathered the long abundance of brunette hair flowing without restraint around her shoulders, unbound from its usual pulled back style, and laid it neatly against her back and out of her way. Taking the more delicate pinchers from her father’s hand, she rolled her shoulders once more and set to work.

Zeno hovered by her shoulder, leaning forward to watch as her long, slim hands worked their magic, as she wielded the pinchers to apply the threads of magenta glass, smaller than the size of a buttercup’s stem, in perfect straight lines. Dipping the tip of the tweezer-like device into the bucket of water by her side, releasing the hiss and smoke into the air, Sophia secured each strand with a miniscule drop of cool moisture.

“A little more this way,” Zeno whispered, as if to speak too loudly would be to disturb the fragile material.

“It’s patience, having the patience to let the glass develop at its will, to cool and heat, cool and heat naturally.” Zeno chanted close to her ear, his voice and words guiding her as they had done since she was young. His muted voice small in the cavernous chamber; their presence enveloped by the creative energy. “As the grape slowly turns to wine on the vine, the sand and silica and nitre become glass on the rod. Ah, you’re getting it now, bellissimo.”

The bang, bang, bang of a fist upon wood shattered the quiet like glass crashing upon the stone; the heavy wooden door at the top of the winding stair jangled and rocked. Someone tried to enter yet the bolted portal stymied their attempts. It was locked, as always when father and daughter shared these moments.

“Are we discovered?” Sophia’s whisper cracked with a strangling fear. She shoved the rod into her father’s hands, dropping the slender metal pinchers on the hard stone floor below, wincing at the raucous clang that permeated the stillness.

“Zeno, Zeno!” The urgent, distraught male voice slithered through the cracks of the door’s wooden planks. “Let me in.”

Parent and child recognized the timbre; Giacomo Mazzoni had worked at the Fiolario family’s glassworks since he was a young man, his relationship evolving into that of a dear and familiar friend. The terror in his recognizable voice sounded undeniable; the strangeness of his presence at such a late hour was nothing short of disturbing.

With an odd calmness, Zeno pointed toward the door. “Let him in, Phie.”

The dour intent upon her father’s wrinkled countenance told her he would brook no argument. Gathering the front of her old, soiled gown, she sprint up the winding stairs, glancing back at the wizened man who stood stock still, rod and cooling piece still in hand.

Sophia pushed aside the bolt with a ragged and wrenching screech. The door gave way the instant it was free. Giacomo rushed through the portal, pushing past Sophia where she stood on the small platform by the door. Clad in his nightshirt, a pair of loosely tied knee breeches flapping around his legs, he looked a fright with his short hair sticking out at all angles, and his black eyes afire with urgent fear. Flying down the stairs, he ran to his friend and mentor, grabbing him by the shoulders.

Befuddled, Zeno stared at his friend, pale eyes squinting beneath his furrowed brow. “Who, Giacomo? Who is dead?”

“Dio Santo,” the words slipped from Zeno’s mouth, through the lips of his falling jaw. His legs quivered. With a shaking hand, he reached into empty air, groping for a stool. Rushing to his side, Sophia grabbed the wooden seat, yanking it forward and guiding her father into it by the arm.

Zeno looked to his beloved daughter’s face. Once more, their frightened gaze locked.