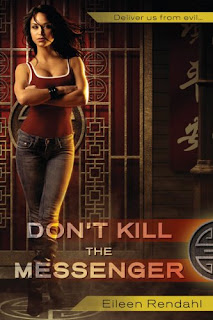 “My job description generally doesn’t put me in harm’s way. Or, at least, it’s not supposed to. I’m a delivery girl, a glorified gopher to the things that go bump in the night. I’m one of the little cogs in the big machine of the unseen undercurrents that keep all our everyday lives moving smoothly. I may not be the most well-oiled of those cogs, but I generally get the messages and package where they need to be by the time they need to be there. Occasionally, however, things don’t go according to plan and I need to defend myself or hightail it out of a situation like Usain Bolt in the last leg of a relay.”

Due to a near drowning at the young age of three, Melina Markowitz is gifted (well, sometimes Melina thinks she is more cursed) with the ability to see paranormal forces and creatures not noticed by the general public. By night, Melina is a file clerk at the local hospital. By day, she teaches classes at a dojo. In between both jobs, Melina is a messenger, delivery girl if you will, for the different factions in the supernatural world. Given a sealed envelope by a vampire, Melina finds herself attacked by ninja-like warriors while in route to make the delivery. The ninja-like warriors kick her derriere and steal the envelope. Determined to not let someone get the best of her, Melina sets out to locate the ninja-like warriors and find out exactly what is in that envelope. But when you are dealing with paranormal forces and supernatural creatures, rarely is anything what it seems and Melina finds herself in a world of trouble involving Taoist priests, Chinese vampires called kiang shi, and some really evil humans.

In the midst of a myriad of paranormal characters (vampire, werewolf, imp, witch, etc.), Melina finds solace in Officer Ted Goodnight, a cop with the urge to protect Melina at all costs. Melina is intrigued by this “normal” man as you can tell from her first reaction to him.

“A cop with no sense of humor. At seven thirty a.m. He made up for it in the eye-candy category, though. The peephole had not done him justice. Gotta love that California-dude bronzed skin, pouty lips, and sunshine-and-surf good looks. And solid. His uniform shirt clung to his shoulders and biceps in a way that left no doubt about what kind of shape this guy was in. Plus, he smelled good. I sniffed. I wasn’t sure what it was, but it made me think of muffins and cookies.”

Nevertheless, there is quite a distance between being intrigued by someone and trusting someone with all you know and all you are. Melina’s journey to trust is revealed to the reader in slow measurements and shows the reader Melina’s difficulty in trusting herself to be vulnerable with another person.

While I generally prefer reading historical romances, I have to say that I really enjoyed this book!! This novel is written in first person from the heroine’s perspective. Ms. Rendahl’s straight-to-the-point and sometimes sassy prose immediately grabbed me from the first page and didn’t let go until I finished the last page. I love a spunky heroine who sticks up for herself and the ones she comes to love. I do, however, wish there was more romantic interaction between Melina and Officer Goodnight. But maybe we will see more of them in Ms. Rendahl’s next book, Dead on Delivery, which is scheduled for release in February 2011.