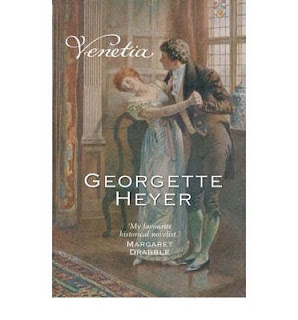 As most of you know, we had a very WET Christmas and New Year here in Queensland where I live. By the way, if anyone would like to contribute to the flood appeal, here's the link:

A lot of people have had a very tragic start to 2011. My new year was in complete contrast. I had a lovely opportunity to curl up with the TBR pile and really make some inroads. What fun!

I'm gradually re-reading all the Georgette Heyers. In Australia (is it the same in North America?), if you're a woman of a certain age, reading Georgette is a rite of passage. It's highly likely your older sister or your mother passed the books on to you as a sacred trust when you were a girl. Georgette was also a staple of libraries, especially school libraries in girls' schools - yes, I'm speaking from experience here. Georgette helped brighten a few miserable days at boarding school!

My mother gave me my first Georgette Heyer when I was nine or ten. It was POWDER AND PATCH which is an odd choice - it's fun but I don't think it's her best work. But the next book was one I fell in love with - the classic THESE OLD SHADES featuring the enchanting Leonie (who actually deserves to be called a minx!) and the jaded, compelling, rather nasty Duke of Avon. After that, I was hooked and read everything I could get my hands on.

Fast forward to my late 20s when a friend had collected every GH and lent them to me for a reading binge. Lovely to rediscover how enchanting those books are! A few years after that, I got hold of all her mystery novels which are also fun. They feature the wit and elegance of her Regencies although without the frocks! 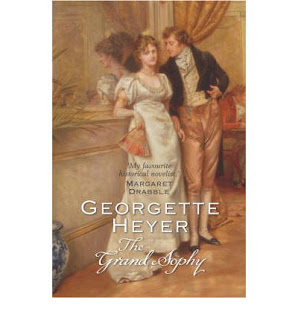 Anyway, I'm slowly starting to re-read the Georgette Heyers once more - I'm always shocked at how little detail I remember from the original stories. The blame for this current Heyer craze lies firmly with the Romance Dishes who asked me to review a new edition of DEVIL'S CUB a year ago. Here's the link to the review:

First up over the Christmas break, I read THE GRAND SOPHY, a sparkling romance that had me laughing out loud. Sophy is a really gutsy heroine who knows her own mind and is used to getting her own way. I think would appeal strongly to a reader who hadn't read GH before.

But the book I'm actually reviewing (if I ever get to the end of this long intro - hope you're still with me!) is the story I decided was my favorite back when my friend lent me her complete collection. Which made it extremely odd when I read it a week or so ago and realized just how much of the story I'd forgotten.

Something I hadn't mistaken, though, is that Venetia is definitely one of the most romantic of the Heyers. In THE GRAND SOPHY, much of the focus is on the comedy of manners surrounding the outrageous Sophy and her staider cousins. In VENETIA, while of course, you still get that delicious comedy, the attention is much more on the emotional lives of the central characters.

Beautiful Venetia Lanyon has led an isolated life in Yorkshire. Her father was a hermit and now she's left to run the estate in the absence of her elder brother who's off having a good time on the Continent. Her younger brother, bookish and self-centered (VENETIA is replete with self-centered males - the only male who pays attention to anyone's needs but his own is the notorious rake Damerel which is just one of many ironies in the story) and afflicted with a limp, is her only company apart from two unappealing suitors from neighboring estates.

Into this quiet, self-contained world bursts Lord Damerel who owns the estate next door. He's a man with an appalling reputation sparked when he eloped at the age of 22 with a married woman. His wild behavior in the 16 years since has become the scandal of the nation. Venetia, who is spirited and intelligent and bored, immediately falls head over heels for this glamorous wastrel. And of course, the glamorous wastrel falls head over heels for her. Nobody except Venetia is pleased with this state of affairs and the plot revolves around various well-meaning attempts to separate Venetia from the man to whom she's given her heart. 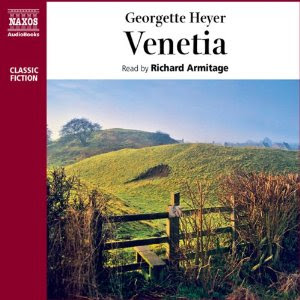 The characterization in this story is exquisite. Venetia is a darling. She may be unworldly but she's smart and brave and knows exactly what she's doing. Damerel is such a sexy hero! And it's wonderful watching this self-indulgent rake lose his heart to an innocent then try in his hamfisted way to protect her from himself. An effort hampered by the fact that the last thing Venetia wants is to be protected from the man she loves!

I was talking to my friend Christine Wells and she pointed out something that struck me as well. How this book is over 50 years old yet seems as fresh and modern as something written yesterday.

If you haven't read VENETIA, grab a copy. You'll love it - and you'll fall in love with the rakish Damerel, I bet! This book is a treat from beginning to end.

Oh, and speaking of treats, if you like to listen to audiobooks, VENETIA is available with the gorgeous Richard Armitage reading. Here's a link to the Amazon page:

Goodness, that's almost too much of a good thing! Be still, my beating heart!

So have you read VENETIA? Do you have a favorite Georgette Heyer? And why do rakes make the most delicious heroes?
Posted by Anna Campbell at 12:02 AM