Guest Review - - Believe in Me 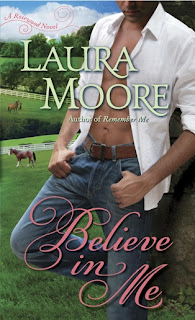 Believe in Me, the middle book in Laura Moore’s Rosewood trilogy, is the story of Jordan, the oldest daughter of RJ Radcliffe, the good daughter whose choices pleased her demanding father. The cracks that were appearing in her perfect marriage in Remember Me, Book 1 in the series, become chasms in Book 2. Jordan has worked to forgive her husband’s infidelity, and marriage counseling has almost convinced her that they can rebuild their life when she receives, in a particularly brutal way, evidence that her husband has no interest in reclaiming their marriage. Soon Jordan has divorced her faithless spouse and has returned, with her three children, to Rosewood, the Radcliffe family estate and horse farm in Virginia. Although she helps her sisters and brother-in-law with the Rosewood horses, Jordan also struggles to start her own interior design business. It is in the role of interior designer that she first meets restoration architect Owen Gage.

The last thing Jordan is looking for is a new man in her life, and if she were looking for someone, it would never be the arrogant, overly ambitious Owen Gage. Attracted by Jordan’s beauty, Owen knows a divorcee with three kids comes with more complications than he wants. But when he hires her to decorate the house he is restoring, the two develop a tentative friendship and soon Jordan is finding Owen as irresistibly sexy as he finds her. Can short-term steam turn into true love? Can the commitment-shy Owen become the faithful lover and family man that Jordan needs?

I would have loved this book for the scene where a snobby bitch gets her comeuppance, if for no other reason, but it offers much more than that one glorious scene. It is the kind of contemporary romance I see too little of these days—a story about a relationship that develops in compelling and credible ways, one that involves the hero and heroine as fully dimensional characters. Jordan and Gage are adults with all the baggage that adults accumulate through decades of living. Sex is powerful, but easy compared to the risk of trusting your heart to someone and making them part of your life. Jordan’s children are real kids with distinct personalities and not always convenient needs. One of the delights of the book was watching Kate, Max, and Olivia work their way into Owen’s reluctant heart. Jordan’s sister Margot and brother-in-law Travis, the heroine and hero of Book 1, play meaningful parts in the story rather than making mere cameo appearances, and the turbulent times of teenage sister Jade continue. The story of a grown-up Jade will be the focus of Book 3, Trouble Me, due out in 2012.

Jordan and Owen’s romance is less dramatic and conflicted than Margo and Travis’s, but the reader is no less engaged in their tale. The Virginia horse country and the historic Rosewood add their own charms to the story. If you like family series and romances that include heart-tugging scenes along with some sizzle, I think you’ll like Believe in Me as much as I did.