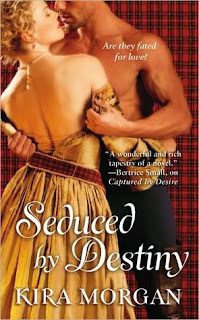 All her life, Josselin Ancrum has been trained for combat, hoping to exact vengeance for her heroic mother, who was killed fighting the English. When asked to spy for the Scottish Queen, Jossy joyfully accepts. But when a handsome stranger rescues her from sudden danger, his charm distracts her from her mission.

On the surface, Drew MacAdam may appear to be nothing more than a carefree champion, but his heart harbors a dark secret: this Highland hero is actually a skilled English solider with a hatred for war and for the Scottish. Yet from the moment he meets the feisty Jossy, he’s captured by her fiercely loyal heart. He’s determined the honey-haired lass will be his ultimate prize – until the tragedy of their entwined legacies is revealed.

Raised by his uncles since his English father took his own life after a bloody battle with the Scottish, Drew MacAdam has been taught to despise the Scots and to fight fiercely and with everything in his being. The only problem is Drew hates to fight. Devising his own secret plan of how to seek revenge on the Scottish for the death of his father, Drew disguises himself as a brawny Highlander and earns his living by beating the Scottish at their own game – the game of golf. Drew may not be killing Scots on the battlefield, but he sure is making a killing with a golf club.

Josselin Ancrum lost both her father and her mother in battles with the English. Raised from a tiny tot by the three Scottish soldiers who brought the bloody body of her mother home, Jossy has been schooled on all manners of warfare and just how deceiving men can be. Upon winning a wager with her fathers, Jossy travels to Edinburgh to witness the arrival of the new queen. After receiving the notice of Queen Mary during a processional, Jossy is offered the opportunity to work for the crown – as a carrier of secret messages. Determined to keep her new Queen and all of Scotland safe from the dreaded English, Jossy readily accepts and begins her new duties.

Drew and Jossy meet during the welcome processional for Queen Mary and from the very beginning sparks are flying. Jossy finds Drew to be ruggedly handsome, like all Highlanders, and she is intrigued with his golfing abilities. When the secret of Drew’s background is revealed to Jossy, she begins to question everything the two of them shared and wonders if she will ever love again.

Drew has never met a woman so feisty and so loyal and boy does she speak her mind. When thoughts of Jossy begin affecting his golfing, Drew knows he has fallen in love … with the enemy. But how in the world can he live without Jossy?

This is a fun read as there are twists and turns in the story but also humor and passion. I really enjoy a story where the hero and the heroine have very strong yet differing beliefs. Watching Drew and Jossy face the obstacles of their love and come to grips with past heartaches is rewarding at the end. True love can conquer all.