Nine years ago, young, carefree Nikolas Acton and sweetly shy Patricia Ramsay discovered one another at a country May Day celebration. The pair spent the day together, shared a magical kiss and fell head over heels in love. They made plans to meet at the maypole the next morning but Patricia didn’t come and Nikolas, fearing she had realized that he wasn’t deserving of her, left heartbroken but he didn’t give up. For the next year he searched for the girl who had stolen his heart, the one he called Isolde (for they had never shared their real names), but though he never found her, he never forgot her. Now, home again after a distinguished Naval career, he knows it’s time to take a wife but none of the young ladies he meets at London balls can hold a candle to his memories of his sweet Isolde. If only he could find her again…

Patricia Ramsay Morgan, Lady Morgan, was not unhappy to be a widow. Forced by her parents to marry a cold, unfeeling man, she suffered him in her bed and in her life but never experienced any pleasure or contentment in his presence. The only comfort she ever derived was in her dreams of the young man to whom she gave her heart nine years ago, the one she had planned to meet at the maypole the very morning her parents arrived with the stranger to whom they had betrothed her. Four years after her husband’s death, she’s raising her two young sons, struggling to make ends meet and dealing with an obnoxious mother-in-law when she receives a letter written by her deceased husband, instructing her to travel to that same country town by a certain date to recover a mysterious treasure her husband buried under the maypole. Along the way, her carriage becomes disabled and she’s rescued by Nikolas Acton, a celebrated English Naval hero, the man she knows only as Tristan…the man who has never left her thoughts or her dreams or her heart for the past nine years. Will they rediscover the love and passion of their youth or will misunderstandings, ill-intentioned relatives and stubborn pride keep them apart once again?

Katharine Ashe has written a wonderful story that is filled with adventure, deep emotion and deliciously sensual romance. Nik stole my heart. The scenes where he opens his heart to Patricia and helps her discover her own sensuality are so exquisitely tender and poignant that they brought tears to my eyes. Secondary characters such as Patricia’s younger sister and dotty aunt-by-marriage add a delightful touch of humor and help keep the story moving along. Often, a novella-length story touches only the surface of its characters but Ashe excels at delving deeper and bringing fully developed characters to the page.

A Lady’s Wish is the debut release of the new Avon Impulse line which will bring original electronic content to the reader. The novella bridges Ashe’s debut book, Swept Away By a Kiss and her next book, Captured By a Rogue Lord (March 29). The heroes of both books make cameo appearances in the novella which heightens my anticipation for Ashe's next book that much more. 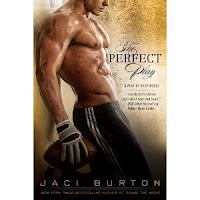 Mick Riley is a star quarterback in the National Football League, so he’s never had to go after women—they’ve always come to him. But from the moment he first meets Tara Lincoln at a team party that she planned and put together, he knows that she’s different from the girls he usually “dates”. He actually enjoys talking to her and likes the fact that she is not at all interested in using him to further her career. This brings him to the point in his life where he’s thinking about the possibility of a long-term relationship. Now all he has to do is convince Tara.

Tara doesn’t know what to think when Mick approaches her and wants to talk to her. Her, a nobody. She quickly learns that there is more to him that what she sees on television and in magazines. They enjoy an earth-shattering night together and then it’s back to normal . . . or so Tara thinks. She is shocked when Mick comes to her business the next day and wants to see her again. She tries to refuse, but Mick doesn’t give up easily. So, she uses the only weapon left in her arsenal: she tells him that she has a fourteen year old son. But that doesn’t bother Mick. Tara has had her heart broken in the past, but will she allow herself to take a chance on love again?

Oh my goodness, I really enjoyed this book! And I promise it’s not just because of the cover. Though, I will say that the cover is one of the best I’ve ever laid eyes on. Mick was not what I expected and I absolutely LOVED him. I adore the way he handles things with Tara. He’s patient, gentle, and just so sweet! Plus, he’s smart enough to recognize that he has something special with her. He’s now one of my all-time favorite heroes. I really enjoyed the scenes between Tara and her son, Nathan. They were incredibly heart-felt. And the scenes between her and Mick? Smokin’ hot. Seriously, they could set the pages on fire. (FYI—it’s an erotic romance.) This is my first book by Jaci Burton, but I can surely say that it won’t be the last as I’ll be picking up the next book in this series. It’s about Mick’s brother, Gavin, who plays professional baseball. If the excerpt for it is any indication, it will be another winner. The Perfect Play is the perfect way to beat those winter blues!

Leah Noble lives in 14th century Scotland, but she is from the 21st century. She came back in time to escape being used as a broodmare by the Nuadian Fae since she bears the blood of the Fae herself. She becomes part of the MacQuarrie clan and comes to love her adoptive family. So when her grandfather becomes a prisoner in his own home courtesy of the English and his back stabbing son, Leah’s grandmother sends her to Dun Ard for help. Leah knows that the MacKiernans of Dun Ard have ties to the Fae, which makes her nervous, but her love for her adoptive grandfather overrides her fears. While she is traveling, Leah falls into a river and is certain she’ll drown (she never learned to swim), but she is pulled from the river---and certain death---by a handsome stranger.

Andrew MacAlister suffers from debilitating pain from an old injury, and he is constantly searching for a cure. He is, in fact, on such a quest when he rescues Leah from drowning. His act of bravery will alter their lives in ways they cannot begin to imagine. Drew agrees to escort Leah to Dun Ard since her map was ruined in her fall in the river, but the situation changes drastically when they cross paths with the English army; Drew claims Leah is his wife in order to protect her. Their immediate attraction begins to grow into something more, and they find that being husband and wife in truth may not be such a bad deal after all.

While this is the seventh book in Ms. Mayhue’s series, this is the first book I have read. I have no doubt I would have enjoyed it even more if I had read the previous books, which I plan to do immediately. Healing the Highlander is a wonderful story! Drew is a wounded hero, but not bitter. He is an incredibly caring hero who feels his emotions deeply. Leah is quite independent, but damaged emotionally from her experience with the Nuadian Fae. She and Drew are perfect for one another, each able to help the other heal. Time travel, a handsome Highland warrior, romance and humor: this book has it all and then some. If you’re ready to escape to the Highlands for a few hours, this one’s for you.

Email ThisBlogThis!Share to TwitterShare to FacebookShare to Pinterest
Labels: A Lady's Wish, Healing the Highlander, Reviews, Stock up Saturday Reviews, The Perfect Play