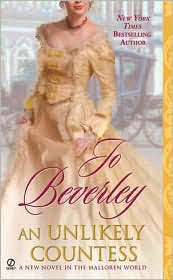 Prudence Youlgrave is living in poverty in Yorkshire. Her mother has recently died and her solicitor brother is too busy with his own life to concern himself overly much with Prudence. She knows her only hope is to marry well, but her chances of that are slim under the circumstances. If all of this weren't bad enough, Prudence is attacked by a band of ruffians. But her luck changes when she is rescued by a handsome stranger.

Catesby (Cate) Burgoyne has returned home after years in the army. After a falling out with his brother, he leaves the family estate and proceeds to drown his sorrows and frustrations. When he comes upon a woman being attacked by several men, he revels in the chance to fight and vent some of his anger. After Cate chases the ruffians off, he offers to escort Prudence to her home to protect her from any further danger. He introduces himself to her, but she never tells him her name. But they share a sweet kiss and a comforting embrace that neither one will ever forget. By morning, Cate is gone, but two lives have been irrevocably altered by their meeting.

A few months later when Cate's elder brother dies unexpectedly, he becomes the Earl of Malzard and returns to his family estate. There is no doubt that his sister-in-law and mother are in the depths of grief, but his mother wastes no time in compiling a list of acceptable women for Cate to choose as his bride and new countess. Cate knows that his mother has always viewed him as a disappointment, so he wants to choose the "right" bride, but the only woman he can think about is the one he rescued months ago, the woman whose name he does not know. Feeling the pressure of his new title, Cate decides to escape for the day so he dons his old riding clothes and heads for the village where he met his mystery lady. When he arrives, he discovers she his gone but her neighbor, Hetty tells him her name and that Prudence is living with her brother in Darlington and is to be married the next day. Cate goes to the church with the intention of seeing Prudence happily married, but when he sees her walking up the front steps of the church it is not happiness he sees on her face. She looks more like she's approaching the gallows. Cate knows it is completely illogical, but he knows he cannot let Prudence marry Henry Draydale, so he objects to the marriage on the grounds that Prudence is already promised to him! All hell breaks loose, but in the end, Prudence becomes Cate's bride. The upheaval from the interrupted wedding in Darlington is nothing compared to trouble that Prudence will face when she meets Cate's family as his "unlikely countess."

Prudence and Cate are incredibly likable characters. Prudence is courageous, strong and loyal, and the reader is shown what a difficult time women had during the Georgian era without the support of a man. Her brother is not intentionally mean, he's just clueless and wrapped up in his own world. But Cate shows her immense kindness, although he is a stranger. And that is something Prudence never forgets. He saves her twice; once from almost certain rape and again from marrying the wrong man. There's a scene right after he stops the wedding that shows Prudence's feelings so well.


The concern stirred life in her again. He was wild, he was rash, he was violent, but he cared for her.

He did, enclosing her in strong, warm arms, as he had once before, when her distress had been much less. She'd never forgotten that. She rested there, taking comfort from the smells of his clothes. They weren't the sort of smells to normally entrance a woman---old wool and leather that carried traces of past smoke and other adventures---but they were the same smells that had lingered in her memory from last time.

From the house in White Rose Yard.

From a brandy-fueled conversation between two people with nothing in common, but who had understood each other very well. He was the only person she'd ever felt such a bond with. That bond had allowed her to ask for a kiss. A dangerous kiss that had led to the tender, unforgettable embrace.


Cate is the kind of hero that steals your heart with his honor, impulsiveness, and impossible-to-resist charm. He and Prudence present a united front against his family's shock and disappointment. Cate will do anything to assure Prudence's happiness, as is evidenced by this passage:


Cate knew his manner was awry, but he was suddenly sensitive to everything that might disturb his wife. Prudence was like a tree in bud that was beginning to unfurl at first touch of summer sun. Frost could still kill the buds, however, and he wanted her to flower.


A strong handsome hero, a spirited heroine, and a villain who tries to ruin their happiness add up to a delightful historical read---what Jo Beverley does best. Treat yourself to An Unlikely Countess and escape for a few deliciously satisfying hours.