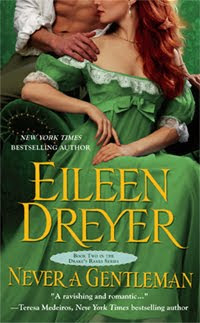 Grace Fairchild has spent her entire life painfully aware of her shortcomings. Plain of face, incredibly tall and thin, and walks with a limp due to a bad leg. Not exactly attributes that have suitors lining up outside her door. A soldier's daughter, Grace is practical above all, but that doesn't stop her from dreaming and longing to be loved by the man of dreams. She thinks she is in the midst of a very sensual dream one night when she awakens to find herself naked and in bed with an equally naked man. And not just any man, but the ton's most dashing rogue!

Diccan Hilliard has no idea how one of his enemies managed to drug him, strip him and place him in Miss Grace Fairchild's bed. But he knows what his next step must be; they must be married without delay, for neither he nor Grace can afford a scandal. Even though Diccan has always liked Grace---he'd nicknamed her Boadicea once upon a time---he had absolutely no desire to spend the rest of his life with her. And Grace didn't want to be married out of duty and obligation. But marry they do, and Diccan is surprised that he desires Grace, and the feeling is very mutual. Their passion for one another continues to grow, but Diccan is up to his neck in secrets and intrigue. Can their fragile relationship survive his lies just as they realize how much they need each other? And will they have the future they both deserve before an enemy from the past takes their lives?

I completely adored Barely A Lady, the first book in the Drake's Rakes series, but I do believe I loved Never A Gentleman even more. Grace and Diccan captured my attention when they first appeared in Barely A Lady---there was so much more that I wanted to know about them---so I'm thrilled that Eileen Dreyer gave them their own story. The marriage of convenience is one of my favorite tropes, and Grace and Diccan's marriage certainly qualifies. Diccan is charming, the darling of the ton, but many times he is more like a bumbling fool when it comes to dealing with his growing feelings for Grace. Is there anything better than watching a man brought to his knees by the woman he loves?


He'd once nicknamed her Boadicea. He'd been more right than he knew. She was magnificent. A goddess; a warrior queen clad in a tattered old scarlet Guards' jacket, sensuous as summer. And he wasn't the only one who saw it. Men smiled. Ladies straightened in saddles, unwilling to be shown up. He felt himself swell with unfamiliar pride. He had always respected Grace. For the first time since he'd run from her bed, he thought he understood why she had so thoroughly aroused him.


Grace is a heroine I could completely picture being friends with. She's loyal, intelligent and witty. She's been told all of her life how unattractive she is, and while she longs for a man to love her, she never thinks it will happen. She is reluctant to marry Diccan under the circumstances they find themselves in, but she knows that this may be her only chance to have a husband, maybe have children someday, and show him that she can make him happy....in bed and out. Diccan shows Grace her sensual side and she revels in it. But she wants more than desire; she wants Diccan's love.


But worse was to come, for after such primal, explosive lovemaking, Diccan untied her, tossed away the blindfold and carried her to the luxurious four-poster bed where he made thorough love to her again, this time with gentleness and tenderness and a smile that could capture the heart of a stone.

It captured her, the bits that hadn't already succumbed. And when she fell asleep, still in his arms, she knew she had made a grave error. She had wanted him too much to protect her heart. She had pretended it didn't matter that only one of them had meant the love they shared.


Because this is a romance, we know that Grace and Diccan will get their happily-ever-after, but getting there is a long and often painful process. Diccan betrays Grace in many ways---it's for his job and duty to his country, but that doesn't make it less painful---and when Grace discovers this, I could almost feel her shock and pain like a blow to the solar plexus. I ached for her, cried for both her and Diccan, and felt my heart break much like hers. By the end of the story, Grace's heart was mended by the love she and Diccan shared, and my heart was also put back together piece by piece with every page I turned.

Never A Gentleman will have readers experiencing the entire gamut of emotions and turning the last page with a sigh of satisfaction. While this book can stand alone, I recommend reading Barely A Lady first, so you can learn more about Grace and Diccan, as well as the rest of the stellar cast of secondary characters, including Lady Kate---Diccan's cousin and Grace's dearest friend---whose story is next. Ms. Dreyer has written another winner. Fans of historical romance won't want to miss this one. Never A Gentleman is now on my keeper shelf next to Barely A Lady, and I'm saving a spot for Always A Temptress which will be released this summer. Those Drake's Rakes know how to sweep a lady off her feet, so start reading this series and get swept away.