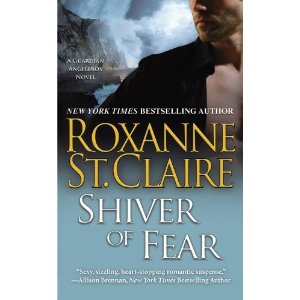 When I pick up a Roxanne St. Claire book I know I’m about to embark upon a roller coaster ride filled with thrills and chills, romance and intrigue and enough twists and turns to keep me on the edge of my seat far into the night. Shiver of Fear, St. Claire’s newest book and the second installment in her Guardian Angelinos series, more than fulfills that promise.

Adopted by a wealthy Boston family, Devyn Sterling has lived the life of a privileged socialite and although she’s been curious about her roots she never could have imagined the true facts of her birth or how many lives would be put in danger by learning those facts.

I’m sorry, Dr. Greenberg. I know you don’t want to meet me, and I really planned to respect that wish, but I told my husband your name and I don’t know if he told anyone else before he was murdered. Just in case he did, I thought it only proper that I be the one to screw up your life…And while I’m here, can we talk about why you gave me up?

Devyn tracks down her birth mother, Dr. Sharon Greenberg, and finding photos of herself from birth to present day in her home, knows that the woman who gave birth to her has never forgotten her. But then she discovers that the renowned scientist is missing in Northern Ireland and in danger. Feeling an undeniable bond with the mother she has never known but who has followed her life so closely, Devyn crosses the ocean to find her and bring her home to safety.

Former FBI agent, Marc Rossi misses the excitement of field work and is more than happy to accept the Guardian Angelinos’ newest “unofficial” FBI assignment; finding Devyn Sterling in Northern Ireland and convincing her to come home – without letting her know who he is or who he’s working for. Should be a piece of cake for someone with Marc’s experience, but things that should be easy rarely are. It quickly becomes clear that more people than the FBI want Devyn out of Ireland and that she and Marc have  stumbled into the middle of something that could have a devastating world-wide impact.

Then there’s the impact Marc and Devyn have on one another. Marc knows better than to get involved with someone on a job, he’s been there before with devastating consequences, but Devyn is nothing like what he expected. She’s warm, intelligent, funny and sexy and the two of them set off enough fireworks to light up the sky. But with both the bad guys and the good guys after them, and time running out on their search for Devyn’s mother, will they even be able to stay alive long enough to explore the feelings growing between them? And, after being betrayed by her late husband, when Devyn discovers that Marc has been lying to her will she forgive him or will his betrayal send her straight into the arms of her deadliest enemy?

Once again, St. Claire has brought to life a gripping story that kept me reading late into the night.  The action is fast-paced; close enough to real life world events to keep me riveted to the pages, with twists and turns that left me gasping with shock and heartbreaking moments, poignant in their simplicity, that brought tears to my eyes and an ache to my heart.  While the bulk of the story is set in Ireland, the final chapter and epilogue return to Boston to bring together the familiar members of the Angelino-Rossi clan that I've grown to love and help set the stage for the next book in the series (Vivi's story).

Note:  While this book stands on its own just fine, for maximum enjoyment (and a clear understanding of the back story) I would strongly encourage you to read the first Guardian Angelinos book, Edge of  Sight, before reading Shiver of Fear.