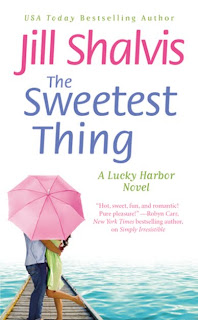 Many of you who visit the blog know how much I loved Simply Irresistible, the first book in Jill Shalvis’s Lucky Harbor series. I was instantly captivated by the three estranged sisters (Maddie, the mouse; Tara, the steel magnolia; and Chloe, the wild child) who were brought together after inheriting a ramshackle inn located in Lucky Harbor, Washington, from their mother when she died. Maddie found her HEA with Jax in Simply Irresistible and in The Sweetest Thing, Tara gets a second chance at love with the very sexy Ford Walker.

Seventeen years ago, 17 year old Tara Daniels came to Lucky Harbor to visit her mother for the summer and promptly fell for a guy who gave her the attention she desperately craved. The only problem was she ended up pregnant. After giving the baby up for adoption in nearby Seattle, Tara returned home to Texas. She was determined to get things right in her life and later married NASCAR star Logan Perrish. Tara was the perfect wife to Logan and gave him her all...which ended up being too much and she lost herself in the process. They eventually divorced and she recently returned to Lucky Harbor after her mother died. At first, she was going to stay only as long as she had to, but she ending up getting sucked into helping her sisters renovate the inn—which made her even more determined to get something right in her life. Working at the local diner to help make ends meet, Tara begins to see Ford around more often. She tries to ignore him and the feelings he evokes in her, but some things are too hard to resist.

Ford Walker has come a long way since that long ago summer spent with Tara. He grew up poor but in time made something of himself when he became a world famous and Olympic gold medalist sailor. He still loves to sail, but now he’s happy running the Love Shack, the town bar, with his pal, Jax. Ford is knocked off his feet when Tara returns to Lucky Harbor and they discover the old feelings are very much still there.

“How is it that we still feel the pull?”

Ford stepped into her, letting her feel exactly how much he still felt it.

“I mean, it shouldn’t still be here,” Tara whispered against his throat as his arms came around her. “I shouldn’t...”

“Some things just are,” he said softly against her hair. “Day turns to night. The ocean tide drifts in and out. And I want you, Tara. Damn you, but I do. I always have.”

I love this book! I just can’t say enough, how much I do. Maddie, Tara, and Chloe are nothing alike, yet each have characteristics that I share. Tara is the oldest (like me) and likes to be in control. She wants things done her way and I am that way with certain things in my life. Many people think she’s uptight, but Ford knows differently:

Well, unless they were in bed. He didn’t mind then, not as long as he got to return the favor.

But there was something about Tara that drew him in spite of himself, that snagged him by the throat and held tight. Maybe it was the tough-girl exterior, which he knew barely covered a bruised and tender heart. He’d seen that heart once...

Like any relationship, Tara and Ford’s takes work. They each have to deal with their own shortcomings in order to be together. Ford let her go the first time because he felt that she was made for better things than being stuck with him. And Tara felt like Ford wasn’t the type to stick around for the long haul. I love both characters and enjoyed watching them reconnect and deal with their problems in a completely mature way.

This book had me laughing out loud—from Ford and Logan trying to show each other up, to Tara and Chloe’s sisterly bickering, to the townsfolk creating a Facebook page to see who Tara would end up with. It also made me tear up when Ford and Tara’s daughter, Mia, had heart-to-heart talks with each of her parents. And of course, it had me sighing during the deliciously sexy scenes between Tara and Ford.

I adore this series and Ms. Shalvis’s writing—I just can’t get enough of her books. As you can guess, I am very much looking forward to Chloe’s story, Head Over Heels, which comes out in December. In the meantime, I’ll reread my copy of The Sweetest Thing because it really is the sweetest thing.


You can order your copy of The Sweetest Thing here: