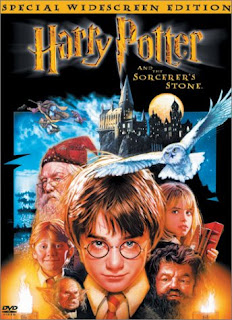 
It all started in the spring of 2003. I was talking to a friend of mine on the phone and she told me that she would have to let me go in a few minutes because Harry Potter and the Sorcerer’s Stone was coming on TV and she was going to watch it.


“You like those movies?” I asked. (At the time, the first two movies had been released.)

“Oh, you should watch the first one now. It is such a good movie!”


My husband was working late and my son was little and already in bed so I figured, what the heck? 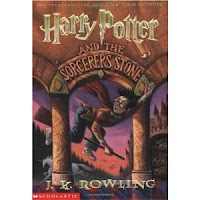 I sat down to watch it and was instantly mesmerized by what I saw. Here was a kid with magical powers just looking for a place to belong. He didn’t “fit” in the Muggle (non magic) world, so when he arrives at Hogwarts, he finally feels like he is home. As the only wizard ever to defeat He-Who-Must-Not-Be-Named, Harry is something of a celebrity at Hogwarts, though he doesn’t realize it until after he arrives. After all, he was only a baby when he defeated the evil wizard and was left with his trademark scar. He makes fast friends with Ron Weasley and Hermione Granger and is looked after by Hagrid, Keeper of the Keys and Grounds at Hogwarts. The movie captivated me from beginning to end and I immediately wanted to see the next one. I called my friend the next day and told her how much I loved it. “I told you!” she replied. And for my birthday a couple weeks later, she bought me the first two movies and the first four books. To this day, it is one of the best birthday presents I have ever received. :)

My parents and sisters had moved away that spring and were back visiting for my birthday. I suggested that we all watch Harry Potter and the Sorcerer’s Stone. I got a few skeptical looks (the same that I had given my friend), but told them that it was a really good movie. Honest. They enjoyed it, but my youngest sister, Trisha, loved it. She connected with it the same way I did. So, we watched Harry Potter and the Chamber of Secrets together next. Needless to say, we both loved it, as well. Even my husband became an instant fan! 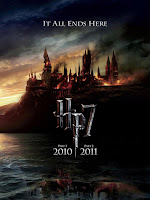 
Speaking of my son, he became interested in Harry Potter a few years ago after watching the movies, too. He loved them so much that he wanted to read the books. So he and I read all seven books last year while he was in the fourth grade. Plus, we still watch the movies quite often. They never get old. Even my daughter (who is almost 7) has caught the Harry Potter bug! She loves the movies and can’t wait to read the books soon! And I am looking forward to reading them again with her. :)

Since we are such huge Harry Potter fans, we just had to visit the new Wizarding World of Harry Potter at Islands of Adventure (Universal Studios) in Orlando. Last month, we got the opportunity to do so. Upon spying Hogwarts for the first time, my eyes actually teared up. It was an amazing sight, even as far away as we were. The closer we got, the more excited we became. But because that section of the park is so popular, they only allow a certain number of people in at a time. We got our ticket and came back later to enter. Wow, was it crowded despite the limited number of entries at a time! First we saw the Hogwarts Express where it was docked at Platform 9 ¾. Then we strolled through Hogsmeade on our way to Hogwarts. We waited over two hours to do the Harry Potter and the Forbidden Journey ride (it broke down for about 45 minutes) 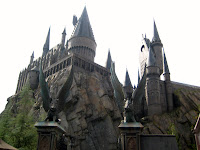 inside Hogwarts, but it was SO worth it! It was an awesome ride! We also rode the Flight of the Hippogriff, which my kids especially loved. Of course, we held nothing back when it came to Harry Potter purchases, because we have no idea when we’ll be able to go back. We bought our own wands, T-shirts, the Marauder’s map, a stuffed Buckbeak (for my daughter), a time-turner keychain, postcards, playing cards, and more. Despite the crowded conditions, we had the best time ever as a family. And isn’t that what it’s all about?