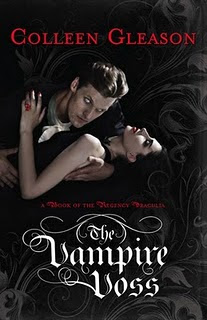 ndon – a dizzying whirl of balls and young ladies pursued by charming men.
But the Woodmore sisters are hunted by a more sinister breed: Lucifer's own.
Voss, also known as Viscount Dewhurst, relishes the sensual pleasures immortality affords. A member the Dracule – a cabal of powerful, secretive noblemen marked with a talisman that reveals their bartered souls – the mercenary Voss has remained carefully neutral ... until Angelica.
Angelica Woodmore possess the Sight, an ability invaluable to both sides of a looming war among the Dracule. Her very scent envelops Voss in a scarlet fog of hunger – for her body and her blood. But he is utterly unprepared for the new desire that overcomes him – to protect her.
Now Voss must battle his very nature to be with Angelica ... but this vampire never backs down from a fight.
Voss Arden, Viscount Dewhurst is a rake, a cad, a profligate scoundrel...and a vampire. One of the Dracule, Lucifer's chosen, he is concerned only about his own pleasure and indulging it in every way, be it sex, blood or both. Voss has now returned to England with news that fellow vampire---and enemy---Cezar Moldavi is searching for Chas Woodmore, the vampire hunter who has abducted (or possibly eloped with) Cezar's sister, Narcise. Voss happens to be on a hunt of his own--- for the Woodmore sisters who are said to have the Sight. He plans to use the sisters for his own selfish reasons, but he must get around Dimitiri, Earl of Corvindale, another Dracule, who has been made the Woodmore sisters' temporary guardian while their brother Chas is missing. Voss's immortal world is turned upside down when he meets Angelica Woodmore at a ball. Her beauty and her blood call to him, but he also has an overwhelming need to protect her from Moldavi and his ilk.

Angelica Woodmore has had the Sight for as long as she can remember, the ability to touch an item belonging to another and "seeing" their death. As upsetting as such things can be, she has made peace with her gift. One evening while attending a ball, she spies a man across the room---someone she has seen in her dreams....falling to his death from a bridge. Ignoring propriety, Angelica rushes up to him, telling him what she has foreseen. Little does she know, she's speaking to a vampire who cannot die from a mere fall. Voss is standing next to his friend, Brickbank---the man from Angelica's dream---and he is thrilled that Angelica is one of the Woodhouse sisters. Each moment that passes with Angelica near him, Voss becomes more enthralled with her, and she finds him equally fascinating. But when Angelica discovers that he is one of the creatures her brother hunts will her fascination to fear and revulsion?

Voss and Angelica are thrust together time and again; Voss saves her from attacks by Moldavi, but when she discovers that he is a vampire, Angelica sees it as a huge betrayal and wants nothing more to do with Voss. But the heart often overrules the head. If Voss wants to save their relationship, he will have to look deep into the heart he's not sure he has and be willing to make the ultimate sacrifice.

Colleen Gleason begins her newest vampire trilogy with this tale of lust, betrayal, and the healing power of love. The world of the Dracule is dark, dangerous, unpredictable, and never-a-dull-moment entertaining. Gleason is the master of the Regency vampire world and fans of her Gardella Vampire Chronicles will devour this new series beginning with The Vampire Voss. And readers won't have to wait long for the next two books; The Vampire Dimitri will be released April 19th, and The Vampire Narcise will be released May 24th. Plenty of great reading to "sink" your teeth into. Bon appetit!