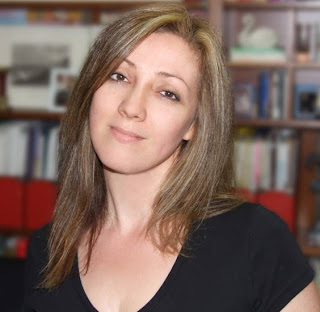 It's Buffie and I am so thrilled to have author Lila DiPasqua joining us today. I fell in love with Lila's writing after reading her debut, AWAKENED BY A KISS. My love for her writing grew with her second release, A PRINCESS IN HIS BED. Both of these books are anthologies with each novella based on a classic fairy tale. With Lila's fiery twist of storytelling, these new fiery tales are a must have for any historical romance reader. Her newest masterpiece, A MIDNIGHT DANCE, will be released tomorrow and it is just fabulous! Check out my review here. Lila DiPasqua is quickly becoming one of my favorite authors. And did I mention she is just the sweetest person too? Yep, she is!! Please give a very warm welcome to Lila DiPasqua.

I have a confession: The very first romance I ever read was — Cinderella.

I believe the reason I love historical romance novels (and write them) is because of fairy tales like Cinderella. Who doesn’t love an underdog story? Especially one that offers a handsome Prince. Dazzling footwear (albeit a tad breakable *smiles*) A spectacular ball. And the best part of all—a happily ever after. 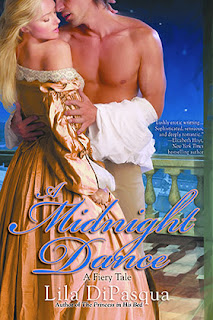 In the third installment in the Fiery Tales series, A MIDNIGHT DANCE, I’ve taken this beloved fairy tale, and all those elements we love about it, and given it my very own fresh twist.

Our Cinder-girl, Sabine Laurent is definitely a damsel in distress, but she’s not waiting for anyone to rescue her. She’s taking matters into her own hands. Upon the recent death of her father, a once prominent playwright, she’s inherited a sizeable debt. She and her family face a debtor’s prison. Desperate, she’s decided that the object of her girlhood infatuation, Jules de Moutier, a man she’d once dubbed her “Dark Prince” (because he’s tall, dark and oh so handsome) is the very man she is going to dupe and steal from. Jules’s silver treasure would solve all of our impoverished beauty’s problems. All she has to do is pose as a courtesan named Elise and feed him the tainted wine. She plans to use her acting skills in this seduction, and has enlisted the help of her eclectic blended family—which includes the balance of her late father’s acting troupe, and a “fairy godmother” in the form of a loveable, yet highly opinionated apothecary. The only appeal about this mad scheme is—she’ll be stealing from Jules—whom she blames for her predicament in the first place.

Devastatingly handsome and rich, Jules de Moutier, firstborn son of the Marquis de Blainville, was an officer in the King’s Navy and the center of attention at any noble gathering. His life was good, his future enviable, until a terrible twist of fate robbed him of his father, his family’s fortune and honor. As a result of his father’s conviction and execution for treason, the Moutier family is no longer in favor with the King. Stripped of their nobility, tossed out of the Navy and disgraced before his peers, Jules has lost everything he’s ever identified with. He’ll stop at nothing to uncover the person who framed his father, reclaim what’s rightfully his and exact revenge. It’s taken him years, but he’s now finally in a position to walk away from the privateering he took up out of necessity—intent on using his newly captured silver treasure to help him reclaim his former life and clear his family’s name. All is going according to plan, until he crosses paths with a certain blond and beautiful desperate thief.

With a devilishly seductive “Prince Charming” like Jules, it’s not going to be easy for Sabine to snatch the silver. Add a healthy dose of intrigue, surprising twists, scandalous behavior, and a couple destined to be together, and you have A MIDNIGHT DANCE—a Cinderella story that is as steamy and exciting as it is romantic. Let the seduction begin!

Why do you think fairy tales like Cinderella continue to be popular hundreds of years after it was first written? One lucky winner will win a signed copy of A MIDNIGHT DANCE. GIVEAWAY OPEN WORLDWIDE.

Inspired by the tale of Cinderella, Lila DiPasqua weaves a steamy historical romance that offers a glass slipper, a dangerous deception, and an impoverished beauty determined to find her handsome prince…and make him pay.

Born into wealth, Sabine Laurent and her twin sister lived a life of luxury, their father’s prestigious theater frequented by royalty and aristocracy alike. And Sabine dreamed of her own prince charming—the devastatingly handsome Jules de Moutier.

That was before the loss of her sister and her family’s fall from grace—a disaster Sabine blames on the Moutier family. Now, with her father’s death, she’s inherited his sizable debt and the responsibility of caring for his spoiled long-time mistress and her two wastrel daughters. But with the help of Sabine’s eccentric friends—the balance of her father’s acting troupe—she plans to get very close to her old infatuation, seduce the rake—and make away with a fortune.

Resisting Jules’s skillful mouth and tantalizing touch is not as easy as Sabine supposed. And soon she must decide whether her desire for vengeance is greater than her desire for her one and only prince…

Read a steamy excerpt of A MIDNIGHT DANCE here.

About the Author:
Lila DiPasqua writes wicked & witty historical romance for Penguin/Berkley. She lives with her real-life hero husband and three children and is a firm believer in the happily-ever-after. She loves history and enjoys traveling. She has been to four continents so far. To learn more about Lila and her books, visit her website.