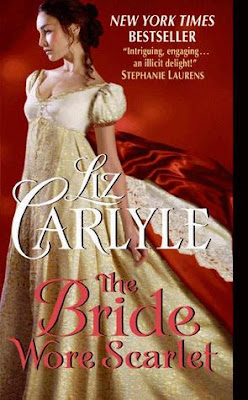 Passion and secrets simmer behind the elegant facade of Victorian London in another deliciously intriguing novel featuring the mysterious men of the St. James Society.

Anais de Rohan has faced danger in her past, but never anything so great as posing as the new bride to one of the St. James Society's most magnetic---and ruthless-leaders. But Lord Bessett's bold challenge to prove herself worthy of joining his secret all-male society is impossible to resist. So she daringly agrees to travel with the enigmatic nobleman on a dangerous mission to save one of their own---a little girl with a frightening gift. Soon intrigue swirls about them, drawing them ever closer. And Anais quickly realizes that the intimacy of sharing Lord Bessett's bedroom is proving a temptation impossible to resist. As for Bessett himself---well, he might be a soldier sworn to the Society, but he certainly isn't anyone's saint...


Anais was told by her grandmother all her life about her destiny according to i tarocchi (the Tarot), which her grandmother had a gift for. Anais was trained to be a Guardian, part of the Fraternitas Aureae Crucis. There's one small problem: the Fraternitas is a Brotherhood, and since Anais is not a man, the rest of the members will not accept her as an equal. But that doesn't mean she can't be of some assistance. There is a young girl who is in need of rescue from someone who wants to use her gift for nefarious purposes. The Brotherhood must send someone to Brussels to get the girl and bring her back to England where she can be cared for and raised to understand her gift (predicting the future). Anais agrees to go to Brussels, posing as the wife of one of the members of the FAC: Geoffrey Archard, the Earl of Bessett.

Geoff reluctantly agrees to accept the mission to Brussels. Posing as the husband of Anais is, in his opinion, nothing but trouble. He is instantly attracted to her, and Geoff feels that being in such close and constant proximity to Anais will prove a far greater temptation than he can withstand. With the life of an innocent child at stake---a child with a gift Geoff understands all too well---Geoff and Anais will put their personal feelings aside in order to do their duty. Honor and duty may be of the utmost importance, but emotions and the wants and needs of the heart will not be denied.

Liz Carlyle is a master of lush prose that draws the reader in slowly, yet inexorably. She creates fascinating, multi-dimensional characters that make you care about them as you follow them on their journey toward happily-ever-after. Their frustration, sadness, anger, passion and love is like your own. Anais is still searching for the future her grandmother saw for her, even if it isn't the right one for her. Geoff has spent his entire life keeping himself at a distance from others, never letting himself give his heart, thereby never getting hurt. Little by little, moment by moment, these two realize that they are meant for one another, no matter how hard they try to deny it.


Those eyes. Those amazing, ageless eyes; so hot and so cold. She was going to drown in them this time. The warm blue of his ocean was drawing her relentlessly back into the waves like a riptide. Anais felt herself torn from whatever earthly mooring had held her fast. After that there was nothing but the brilliant light, a perfect crest, and the whisper of her name on his lips.

They came together as one; and it was as if her soul flew to his. The rich, churning depths washed over her, and Anais knew that this time she was lost.


When you read The Bride Wore Scarlet, you will lose yourself as fully as Anais and Geoff lose their hearts to each other. I highly recommend it!