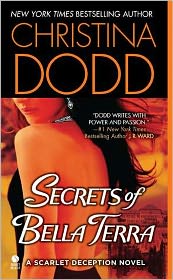 I love Christina Dodd’s voice. I’ve been reading her books for years and have followed her from historical to contemporary romantic suspense to paranormal. When I pick up one of her books, I know I can look forward to a romantic adventure, compelling and sensual, richly told with engaging characters and a strong storyline that keeps me glued to the pages until the very end. Dodd’s newest book, Secrets of Bella Terra, first in her romantic suspense Scarlet Deception series, more than fulfills my expectations.

No matter how much in love you are, when you want different things from life, that love often ends in heartbreak. For the teenaged Brooke Petersson, the lure of sexy Rafe Di Luca and the traditions of his close-knit Italian family was everything she wanted and had never experienced with her divorced military parents. But life was determined to send them in different directions.  Rafe was determined to do something worthwhile with his life and planned to join the military after high school while Brooke’s dream was to attend college then return to the safety and security of California’s Bella Valley and the family that treated her as one of their own, even though she and Rafe were no longer a couple.  Four years later, they came together again while Rafe was in the throes of post-Afghanistan PTSD. Brooke knew her heart was likely to be broken once more but Rafe needed her and their shared love would not be denied. Now, seven years later, Rafe travels the world as the head of an elite security company, leaving the running of the Bella Terra Winery and Resort to his two brothers, with Brooke as their internationally acclaimed concierge.

When his grandmother is beaten by an intruder in her home, Rafe leaves a rescue mission in Kyrgyzstan to rush to the bedside of the woman who raised him. Arriving at Bella Terra, he soon discovers that, rather than the random attack detailed in the local police report, the reasons behind the assault on his grandmother are rooted in family rivalries, a missing bottle of priceless wine, a destructive hatred that puts their lives and livelihood on the line and the possible involvement of someone on the Bella Terra staff. The perfect person to work with him on the investigation is the woman who knows the resort and its staff best, the woman who wants nothing to do with him even as her heart is drawn to him, the woman he has never stopped loving in all their years apart. Rafe and Brooke have both matured during the time they’ve been separated and Brooke, in particular, is no longer the young girl who worshipped the ground Rafe walked upon. This Brooke is a woman; strong, independent and more fascinating than ever to the man who loves her but has always left her. Will this be the time they get it right?

This story grabbed me from the first few pages and never let go. The mystery was expertly revealed, layer upon layer while the characters were realistic and relatable, especially Brooke and Rafe, whose actions rang true throughout the story. I ached for the pain of their young love, so familiar to me, and cheered them on throughout their third attempt to finally reach a happy ending. Rafe, an alpha male if there ever was one, had me from the get-go.  While there were times I wanted to slap him upside the head for his high-handedness, he touched my heart with his sensual seduction, gentle care and clumsy attempts to verbalize what was in his heart.

Adding to the richness of Secrets of Bella Terra is the spot-on dynamic among the three brothers; Rafe, Eli and Noah. As the older sister of four brothers, I especially enjoyed the repartee and interactions among the three men. Sarah Di Luca, their grandmother, is the thread that weaves the lives of the three brothers together and I loved her spirit.  A perfect example is after Rafe, Eli and Noah blow off steam by brawling with the Marino brothers at the Beaver Inn.  Sarah insists on having her photo taken with the three bruised and battered men as proof to substantiate her story that she was really injured in a bar fight and not by an intruder.  Contrasting with the loving, supportive relationship Rafe and Brooke share with Sarah are the complicated relationships between Rafe and his movie-star mother and Brooke and her disabled, ex-military mother (as well as both of their neglectful fathers) which add a complexity that helps the reader understand the people Rafe and Brooke were…and have become.

While the mystery of Sarah’s attacker is solved in this book, the overall mystery will continue to be unveiled in Eli and Noah’s stories – books I cannot wait to get my hands on!