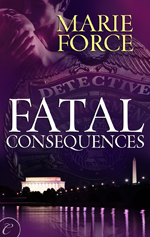 Romantic Suspense is not a subgenre in which I read widely, but there’s a handful of RS writers whose characters are so beautifully crafted that I overcome my tendency toward wimpiness and read their books. Marie Force is one of that handful. I first read her because I was intrigued by the Washington setting, but I have continued because I was captivated by the relationship between Lieutenant Sam Holland, a homicide detective, and Senator Nick Cappuano.

Fatal Justice (Book 2), ended with Sam accepting Nick’s marriage proposal in the White House Rose Garden. Fatal Consequences opens at the wedding reception of Sam’s father. Faced with an obligatory dance that will make Sam and Nick and Sam’s sisters and their husbands the center of attention, Sam mutters, “I’ve never wanted to be called to a murder scene more than I do right now.” Minutes later a phone call from Henry Lightfeather, senior senator from Arizona and one of many Friends of Nick, sends her to a murder scene.

Senator Lightfeather has found an employee of Capitol Cleaning Services, an immigrant from Guatemala, dead in her apartment. Why was the much married senator in the apartment of the woman who cleans his office? At the least the senator is a material witness, perhaps more. Soon the body of another beautiful immigrant, also an employee of the Capitol Cleaning service is discovered. As Sam and her team continue their investigation, one of their own is attacked. All the resources of the D. C. police department are directed at finding the guilty party, undeterred by evidence leading them to the nation’s seats of power.

Meantime Sam and Nick are planning a wedding, dealing with the shocking news that her dangerous ex-husband is being released on a technicality, and learning that love and commitment don’t absolve them from the tensions that develop between two strong-minded people sharing physical and emotional space. Force weaves together threads from Sam’s and Nick’s personal and professional lives to create this story of intelligent, complex characters whose love for one another has become the still point of their complicated world.

One of the problems I have with some romantic suspense is that the story is all edge-of-the-seat, heart-in-the-throat moments with characters in jeopardy having hot sex in moments of crisis. Clearly there’s an audience for these books, and I’m not knocking them. But these are not books I want to read. I am interested in characters and their relationships. What I love about Marie Force’s book is that the excitement and danger seem real, so real they sometimes seem to be the full story of some bit from the news, but her characters are just as real. Sam and Nick are in danger, they do take risks, and they have hot sex. But they also have full lives with families and friends. Part of their relationship with one another involves the integration of their separate lives into their life as a couple. The secondary characters have their own stories that manage to be engaging without overwhelming either the case that controls the plot or the relationship between the protagonists that is the heart of the books.

Force provides enough details to prevent a reader who has not read the first two books from feeling lost in this one, although Fatal Consequences will be a richer read for those who are familiar with the earlier books. I think romantic suspense fans will enjoy this book, but I also recommend it to readers who don’t usually read romantic suspense. I’m betting such readers will be just as fascinated with Sam and Nick and the people who populate their world as I am. As for me, I’m poised on ready to read “Fatal Destiny,” the wedding novella that will be available free on the author’s website on September 5 and for Fatal Flaw, Book 4, which is scheduled for release in February 2012.