Guest Review - - Only Mine

Only Mine
By Susan Mallery
Publisher: HQN
Release Date: July 26, 2011 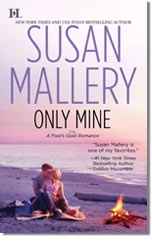 Media coverage of a man shortage has brought a reality dating show to Fool’s Gold, California. Mayor Marsha Tilson isn’t happy about the show and agrees to cooperate only if someone from her town joins the production staff. Dakota Hendrix, child psychologist, unable to resist the mayor’s pleas for help, agrees to take the assignment to protect the town’s interests and image.

Finn Andersson, a pilot from South Salmon, Alaska, plans to be in Fool’s Gold only long enough to make sure that his twin brothers give up their absurd idea of being contestants on the show and return to complete their final semester of college. Finn’s responsibility for his younger brothers began when their parents died in a plane crash that Finn survived. He wants what he thinks is best for his brothers, and he also sees their college graduation as his own graduation from responsibilities as stand-in parent.

Their first meeting sets the tone for the relationship between Dakota and Finn. Dakota is empathetic, patient, and funny. Finn is a quick-tempered champion at jumping to conclusions with an unexpected sense of humor. The two rapidly move from acquaintances to friends to friends with benefits. But is there any hope for lasting love between a woman who dreams of marriage and children and a man determined to remain unencumbered? And then there’s the small problem of her deep roots in Fool’s Gold and his determination to return to his air transport business thousands of miles from small town California.

I’ve been reading Susan Mallery since The Bodyguard and Ms. Jones in 1996. I have enjoyed her blend of family relationships and romance through countless books, with special affection for the Marcellis and the Buchanans. Despite a problem with the hero of Almost Perfect (FG #2), I am hooked on the Fool’s Gold series. I love the mix of characters, and I have been anticipating the triplets’ stories since I finished reading Finding Perfect last September.

Dakota is all that I hoped she would be as a heroine—strong, vulnerable, and sunny despite some real problems. Mallery does a superb job of creating a modern young woman who is close to her family, relies on them for support, and encouragement, but has her own life and makes her own decisions. Finn was a problem for me. He has some wonderful moments that reveal him as a tender, nurturing man. But every time I decided he was my kind of hero, he behaved like a jerk.

Twenty-one-year-old Stephen, one of the Andersson twins, seems more mature than Finn, and the romance between Stephen and Aurelia, the woman with whom he is paired on the dating show, is one of the best parts of the book. I hope Mallery gives us more about this relationship. I also enjoyed the glimpses of characters from earlier Fool’s Gold books. I applaud Mallery for including only those characters that worked naturally into the story rather than creating a forced reunion that cataloged all the characters from the series.

Despite my problems with the hero, I was happy to visit Fool’s Gold again, and I look forward to returning for Only Yours (August 30), Montana’s book, and Only His (September 27), Nevada’s book.