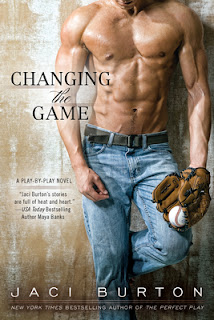 Sports agent Elizabeth Darnell is fully aware that she works in a male-dominated industry, but doesn’t let that deter her from being exceptional at what she does. So when she messed with her biggest client’s (Mick Riley from The Perfect Play) love life, Liz knows that she screwed up, and she paid the ultimate price—she lost an important client and dear friend. She naturally assumes that Mick’s brother Gavin (who is a star Major League Baseball player and also her client) will follow in Mick’s footsteps and fire her as well. Since the “incident”, Liz has done her best to avoid Gavin so he can’t do just that. When Gavin corners her at a team party and says he needs to talk to her, she thinks this is it. He drives them to his beach house to talk and Liz is surprised when he doesn’t fire her—he just wants to know why she’s been avoiding him. Even when he gives her a seductive look, she simply can’t tell him the truth.

She always kept her distance from him, usually met him in crowds and at public events where she’d be safe.

And she had a damn good reason for it.

One, she was four years older than him. She didn’t date younger guys. Ever.

Two, she was in love with him and had been for years.

Three, he was totally, utterly, and completely oblivious to it, and she intended to keep it that way.

Gavin knows that Liz made a huge mistake, but she apologized and made up for it so he’s good with it. Her detachment prompted him to look at her in a different light and he can’t stop thinking about her. When their “talk” leads to a blazing hot night of sex, Gavin wants more. He asks Liz to stay at his place through spring training and she agrees. During this time, he gets to know the real Liz underneath the cold-hearted façade she shows most people. Liz begins to wonder if she and Gavin can keep their professional and personal relationship separate. Or do they have to?

I really enjoyed Changing the Game! Liz was the “villain” who made a huge mistake in the previous book and while she did make amends, I was super curious how Jaci Burton would handle her as a heroine. Well, she certainly convinced me. I came to care for Liz every bit as much as Gavin. And I can totally see why she’s held a torch for Gavin for years when he says things like:

“Honey, I am that good. I know what you want, and I can give it to you. Anytime you want it. Anytime I want it. That’s why you want to be here with me.”

Yes, Gavin is that good. He’s a macho alpha who takes on a woman who likes to be in control all the time. This of course led to some serious sparks between the two. And even though he did something that made me want to strangle him, I chocked it up to him being a man...and he more than made up for it. *g* I love this series because even though they are erotic romance, they’re more than just sex. These stories are full of heart and real, multi-layered characters that I truly care about. I just adore the whole Riley family. After reading the excerpt in the back of this one, I am extremely eager for their sister Jenna’s story, Taking a Shot, coming in February of 2012. Until then, I definitely recommend both The Perfect Play and Changing the Game!