Review - - In Bed with a Highlander

I'm a huge fan of medieval romance and of Julie Garwood in particular.  Her book, Saving Grace has been my all-time favorite comfort read for many years and until now, I hadn't found a book to rival it in my reading affection.  Saving Grace now has a new neighbor on my keeper shelf:  In Bed with a Highlander by Maya Banks.  I've already read this book three times and have found new things to love about it with each reading.  If you read medieval romance, buy this book now.  If you don't read medieval romance, now's a great time to start and I highly recommend you begin with In Bed with a Highlander. 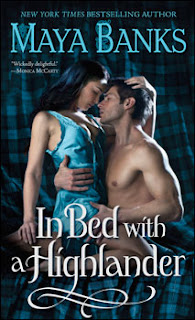 Mairin Stuart knelt on the stone floor beside her pallet and bowed her head in her evening prayer. Her hand slipped to the small wooden cross hanging from a bit of leather around her neck, and her thumb rubbed a familiar path over the now smooth surface.


For several long minutes, she whispered the words she’d recited since she was a child, and then she ended it as she always did. Please, God. Don’t let them find me.


The bastard daughter of a king, Mairin Stuart has spent most of her life hidden in an abbey.  Endowed with a rich dowry that will bring her future husband wealth and power, Mairin is well aware that she must be very careful whom she chooses to marry for many unscrupulous men would do anything to hold that power, even kidnap her from the abbey and beat her to within an inch of her life to force her to marry.  But the villain of our story, Duncan Cameron, has met his match in Mairin Stuart.  She refuses to marry Cameron and manages to escape him with the help of young Crispen McCabe, a lost 8-year-old boy Mairin encounters during the  journey from the abbey to Cameron's home.  Mairin saves the boy's life and he, in turn, promises her the protection of his father, Laird McCabe if they can escape and make their way to McCabe land.

Ewan McCabe lives for the day he can make Cameron pay for the near destruction of the McCabe clan and the deaths of Ewan's wife and father.  He has neither the time nor the desire to take another wife but when his lost son is found and returned to him in the company of a young woman who could bring his clan the money they desperately need, he knows marriage is the only answer for both the McCabe clan's survival and Mairin Stuart's protection.  He makes the logical decision for the sake of his clan and the lass, never expecting his heart to become part of the equation.

Mairin is a wonderful heroine!  She has an innate kindness, a stubbornness to rival any Highland laird and a core of strength that serves her well during her perilous journey to love. Pair that with the innocence and  vulnerability of someone who was raised by nuns and she's hard to resist. She also has the unfortunate habit of saying whatever she's thinking which leads to a number of humorous situations with Ewan, his brothers and other members of the McCabe clan such as this encounter with Ewan before their marriage.

His gaze narrowed and she could see his hands twitching again like he'd love nothing more than to throttle her.  She was beginning to think it was an affliction of his.  Did he go around wanting to choke the life out of everyone or was she special in that regard?

"I'm afraid 'tis an urge that is entirely original to you," the laird barked.

She clamped her mouth shut and closed her eyes.  Mother Serenity had vowed one day Mairin would regret her propensity to blurt out her least little thought.  Today just might be that day.

Ewan is my favorite kind of hero.  Of necessity, he's a hard man.  Responsibility for his family and his clan rides on his shoulders and duty is all-important.  As laird, he demands complete loyalty and trust from his clan and is thrown for a loop when Mairin doesn't meekly fall in with his plans.

"You are under my protection.  You will obey me without question."

"Not bloody likely," she muttered.

I just love it when a strong, alpha male is thrown off kilter by a slip of a girl who turns out to be so much more than anyone expects.  As Ewan fell in love with Mairin, I fell in love with Ewan.  To watch this battle-hardened warrior slowly discover, and ultimately accept, his feelings for her melted my heart.  There were a few scenes that brought me to tears but the one with the most impact occurs when they are torn apart and don't know if they will ever see one another again.

Mairin was being pulled away, her eyes filled with tears, her arms outstretched to Ewan.

"Mairin!" Ewan called hoarsely.  "Listen to me.  Survive.  You survive!  Endure.  No matter what.  Endure what you must but survive for me."

I get chills every time I read that scene.

Surrounding the hero and heroine is a wonderful cast of secondary characters.  Crispen, especially, is so endearing and we learn much about Ewan and Mairin through their interactions with him.

This is my first book by Maya Banks and I can hardly wait to read the next.  She has a way of writing that pulled me right into the story and into the thoughts and emotions of the characters.  The words flowed with nary a hiccup, touching all of my emotions, and the story held me captive until I finally turned the last page with a deep, heartfelt sigh.  I can't wait to return to Scotland for the stories of Ewan's brothers, Alaric and Caelen. Luckily, I won't have to wait long and neither will you!  Seduction of a Highland Lass will be released September 27th followed by Never Love a Highlander on October 25th.