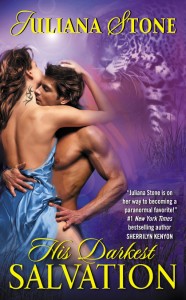 At the edge of Julian Castille's vision a shape lingered, drifting, out of focus, ethereal.  Watching...waiting, until it was time.  Then she would carefully slice into his chest, peel back a piece of skin, and resume her position.


To wait once more.


For the day he'd finally break.

Julian Castille has been in hell. Literally. After six months of continuous torture in the fiery depths of hell, Julian returns to the world a changed man. A former corporate CEO and ladies man who once shunned his shape-shifting heritage, Julian now fully embraces the deadly jaguar inside him. He must, for it’s the only hope he has of saving mankind from the horror of the underworld, the only hope he has of regaining the part of his soul that has been ripped from his body, the only hope he has of escaping a fate much, much worse than death.

Jaguar shape-shifter, Jaden DaCosta walks a very fine line between two lives. As manager of one of her family’s resorts, the beautiful and sensuous Jaden presents to the world the image of a competent businesswoman and dutiful daughter while secretly working to destroy her father and the evil creatures with whom he consorts. Jaden remembers the warm, loving father of her childhood but that man has been gone for a long time. Dancing with the devil will do that. Too many people have died at her father’s hand, including her beloved mother, and Jaden won’t rest until he’s made to pay.

Three years ago, Jaden and Julian spent one incredible night of passion together. For Jaden, the experience was life-changing for in Julian she recognized her true mate but Julian’s response was far different. Stunned to discover that the beautiful woman he had just made love with was not only a jaguar but a member of the evil DaCostas, despised enemy of his family, he walked out after treating her with less respect than a prostitute on the street. Now he’s back, as strong and devastatingly attractive as ever, but darker, more deadly and ready to take out anyone who stands in the way of his mission…even Jaden.

While animosity and mistrust simmer between Julian and Jaden, their mutual, unwanted desire is as fiery as ever as is their mutual desire to vanquish the demons straining to escape the underworld and overrun mankind with their evil. They must work together if they have any hope of success but will victory bring them salvation or must they make the ultimate sacrifice to save the world?

I read this book in one day and when I finally turned the last page I sat back, took a deep breath and uttered one word. “Wow!” Then, because I couldn’t help myself, I said it a few more times. “Wow, Wow, Wow, Wow, Wow!” Talk about your roller coaster rides! This book took off on page one and never once slowed down…and I enjoyed every minute of the experience. I'll admit that Julian isn't always the easiest hero to like. His captivity has ripped almost every human emotion from his soul and as he struggles through each day his treatment of Jaden borders, at times, on the unforgiveable yet Stone manages to write him in such a way that I understood the desperation that drove him and forgave much of his behavior because of it. And, of course, he redeems himself very nicely in the end.  Jaden is a wonderful heroine; strong, fiercely independent, confident in who she is and what she must do.  I admire those qualities in her while at the same time understanding her underlying vulnerability to the complexities of the relationships in her life – both with Julian and her father.

The action in HIS DARKEST SALVATION is intense, the sex is scorching and the language often is blunt but that’s what the characters demand and it works. It works very well. This is the third book of Stone’s jaguar trilogy and can stand on it’s own but I strongly encourage readers to read the three books in order to fully appreciate both the journey of the characters and the final outcome when it arrives. The books, in order, are HIS DARKEST HUNGER, HIS DARKEST EMBRACE and HIS DARKEST SALVATION.