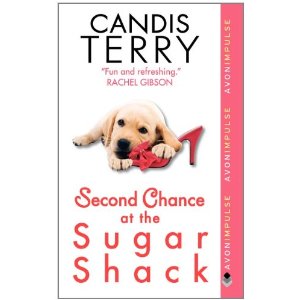 Kate Silver is a city girl who lives a high pressure, chaotic life dressing rock stars and actors and reveling in her own designer wardrobe. Katie Silverthorne was a small-town girl who worked in her parents’ bakery, wore jeans and cotton blouses, and dreamed of escaping Deer Lick, Montana, and the mother whose approval she could never win. Kate thought she had left Katie behind forever, until the news of her mother’s death sends her home for the first time in ten years only to find Katie is still part of Kate.

Kate’s plan is to spend three days in Deer Lick and return to her crisis-a-minute job that keeps her flying from New York to Los Angeles. But when her prosecutor sister, who has a high-profile murder case in process, and her quarterback brother, who has an NFL contract that requires his presence on the football field, push her guilt button, Kate extends her stay to help out at the Sugar Shack and take care of her dad. Still, she’s poised on ready, planning to leave as soon as possible. But Matt Ryan, the boy she left behind, has her remembering what young love was like and discovering that the handsome deputy with his propensity for handcuffs is even sexier now than he was a decade earlier.

Meanwhile, Kate is finding a creative outlet in her baking, getting involved in the community, falling hard for a no-name golden retriever stray, and reconnecting with her best friend. Then there’s her mom. She keeps showing up when Kate’s driving her mother’s old Buick, or at least her mom’s spirit does, and she is as eager to advise Kate about life decisions as she ever was.

Matt is determined to avoid Kate once he’s made clear exactly how little he thinks of her now, but he can’t get her out of his memories or his fantasies. He’s angry that her presence in Deer Lick is playing havoc with his plan to find a sweet, proper wife who will help him get elected sheriff. He’s even angrier that his heart and libido won’t let him ignore Kate, no matter how determined he is that she has no part in his life.

Second Chance at the Sugar Shack is the author’s debut novel. This contemporary romance blends small-town coziness with a second chance story and a generous helping of sizzle and adds a dash of humorous paranormal to create a treat as sweet and unexpected as one of the heroine’s Sugar Shack deserts. I loved Kate with her strength, her ambition, her vulnerabilities, and her astringent humor. Matt failed to impress me as much. Ten years seems long enough for a wounded heart and injured pride to heal, and sometimes his behavior bordered on jerkiness. But he is good-looking and sexy, and he does prove himself a romantic hero in the end. And even though I like small town settings, I was also bothered by the small town equals good, meaningful life, city equals wicked, meaningless existence equation.

I’m not a paranormal fan generally, but the ghostly presence of Kate’s mother gave this novel a different twist that added sweetness and humor to the book. The healing of the hurt that Kate’s relationship with her mother had inflicted on both parties is touching, and the reader understands that Kate is indeed her mother’s daughter. This exchange after Kate has overindulged at a bar is typical:

Her mother released a heavy sigh.

Was that even possible?

“Boyfriend? I’m talking about soul mates, Katherine. That’s what my Bobby and I are. That’s why he’s going to be just fine. He knows I’m waiting for him—not that I want to hurry him up. But he knows our love reaches far beyond earthly boundaries. And that’s what you need to find.”

Kate shook her head and the vinyl seat squeaked. What she needed was another Guinness. She and her mother had barely spoken for ten years and the woman was worried about Kate finding a man? What about the argument that’d had before she left home? Sheesh. Still, if her mother wanted to discuss men, she’d try to comply. Arguing had never got them anything but estrangement.

“Mom, I barely have time for a dinner date let alone a soul mate. What I need to find is a way to help Dad get his life organized so I can get out of this hick—“

A sharp rap on the window startled her and sent her heart racing.

Through her side window, the white neon light from Bill’s Barber Shop reflected off a shiny pair of handcuffs that swung like a pendulum from a very large, very masculine hand.”

Second Chance at Sugar Shack is the first book in a trilogy. I expect Mom will be back to advise Kate’s brother, Dean the quarterback, and sister, Kelly the prosecutor. I’m planning return trips to Deer Lick too.