Review -- The Many Sins of Lord Cameron 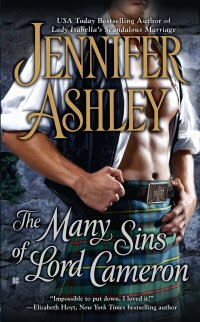 He is a man of simple tastes---and complex pleasures...

Lord Cameron Mackenzie loves nothing better than spending his days with the horses he trains...and his nights with the women he seduces. As much as he enjoys women, he finds that the horses give him much less trouble---but that doesn't mean he's giving up women, difficult or no. During a house party at his brother Hart's estate, Cam is well on his way to a satisfactory interlude with the very cooperative Phyllida Chase when he hears a noise near the window in his room. Imagine his surprise when he pulls back the curtains and finds Ainsley Douglas staring back at him with her large, gray eyes. Why is this troublesome, but attractive widow skulking about in his bedchamber...again. He wonders if her excuse now will be better than the one she had six years ago.

Ainsley Douglas cannot believe she has been caught rifling through Cameron Mackenzie's room...and by the man himself, no less. She is just trying to recover letters that belong to Queen Victoria that could be extremely embarrassing. Phyllida Chase has stolen the letters, and Ainsley is certain that she has hidden them in Cam's room, her latest lover. Naturally, these two would come in the room while Ainsley is trying to find the letters, to no avail. But Ainsley is found out---although Cam does not let Phyllida know---and Cam refuses to let her leave his room until she tells him why she's looking for the letter. And the price she has to pay does not involve money, but it may inevitably cost her her heart.


He was rude, ungentlemanly, brutish, and dangerous. Lord Cameron collected erotica, people told her, books and art. She saw no sign of that lying about, although the painting that hung over the bedside table---a woman sitting on her bed pulling on her stockings---held unashamed sensuality.

But though a lady ought to regard Lord Cameron in disapproval, even apprehension, he made Ainsley's blood tingle. He again was awakening things in her that had lain dead for too many years.


Is there anything more delicious than a rake just begging to be tamed by the right woman? Well, Cam Mackenzie is all that and more. He is scarred physically and emotionally---his marriage with his late wife was an abusive one in more ways than one (she abused him)---so he has closed himself off, not opening his heart to another woman, not risking having it broken. Yes, he is my favorite kind of hero, and Ainsley is just the woman to break through Cam's self-imposed barriers and heal him with her love. Ainsley has suffered her own heartbreak, albeit in a different way. And although her attraction to Cam knows no bounds, she is afraid to fall in love with him, because he has made it clear to one and all that marriage is not something he ever wants to try again. But then Cam met Ainsley and suddenly love and marriage didn't seem so impossible after all.


Cameron turned her around and kissed her again, this kiss lingering and slow. "You're a beautiful, beautiful woman, Ainsley Douglas. And I want to drink you down."


With lines like that, is it any wonder that I was fanning myself?! I've been mad for the Mackenzie men since I read The Madness of Lord Ian Mackenzie, which is still one of my favorite books, ever. They are bold, sexy, honorable men---my favorite kind---and Cam won my heart just as thoroughly as the rest of the bunch. He hides his pain behind his cavalier attitude, but it was palpable, and it made my heart ache for all that he had been through. The love between Cam and Ainsley is a thing of beauty and the passion between them....whoa! I'm surprised I didn't spontaneously combust while I was reading this book.

The Many Sins of Lord Cameron is the third book in the Highland Pleasures series. It's not completely necessary to read the series in order, but the first two books were so delicious, I would recommend savoring the series...and all of those manly Mackenzies. So, the order is: The Madness of Lord Ian Mackenzie, Lady Isabella's Scandalous Marriage, and The Many Sins of Lord Cameron. Fans of this series, stay tuned. The next book, TheDuke's Perfect Wife (Hart's story), will be released next year.

I really cannot recommend this book highly enough. If you haven't met the Mackenzies, you don't know what you're missing.