Linda Lael Miller has been one of my go-to Western Romance writers for many years.  I enjoy her small-town settings, strong, supportive families and the solid roots put down by her characters when they finally meet the person they're meant to love for a lifetime.  I especially enjoy reading her books back-to-back so it was with particular delight that I recently discovered the Creed Cowboys trilogy released in February, May and June of this year.  The books follow the journeys to love of Steven Creed and his identical twin cousins, Connor and Brody. 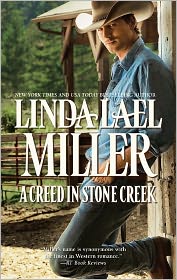 The memories of familiar places are too heartwrenching for Denver defense attorney Steven Creed and his newly adopted five-year-old son, Matt.  After the deaths of Matt's parents, Steven's long-time best friends, the two move to Stone Creek, Arizona: a place of new beginnings for the newly-formed family of two.  One of the first people they meet is Melissa O'Ballivan, county proscutor and life-long resident of Stone Creek.  Melissa has closed herself off to love after being abandoned by her mother at a young age and losing her father and grandfather to death but, after watching her siblings find their soulmates, she has begun to open her mind to the possibility that there just might be more to life than her career.  Can her heart be far behind?  Not if a little boy and his ruggedly sexy new dad have anything to say about it! 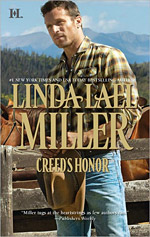 Tricia McCall has wonderful memories of summers spent with her dad and great-grandmother in Lonesome Bend, Colorado but now she's a city girl and anxious to return to Seattle once the properties she inherited from her father finally sell.  She's been emotionally adrift since the deaths of both her father and her beloved dog, Rusty but is sure she'll be fine once she returns home to Seattle.  Her best friend lives there with her husband and Tricia's adored goddaughter and she has plans to opening an art gallery there with the man she's been dating even though she's finally started to admit to herself that the relationship has cooled and, as her friends have been telling her, he's not the right man for her.  Then fate steps in - in the forms of a lost, bedraggled dog and one sexy cowboy - and suddenly, Tricia wonders if maybe she isn't already home.

Steadfast and honorable are two words that describe Connor Creed.  Sexy, rugged and handsome work too.  Also emotionally unavailable.  After his twin brother, Brody and the girl Connor had planned to marry betrayed him ten years earlier,  Connor poured all of his energy and emotion into working the family ranch outside Lonesome Bend.  But now Brady has returned with the news that he plans to stay and work the ranch that's half his and Connor's emotions are erupting...and beginning to heal.  A sweet, shy woman who makes his heart race and her matchmaking dog could bring the love his heart craves or shatter it to pieces if she decides to return to Seattle for good.

Brody Creed has experienced plenty of heartache in his life.  Caused plenty too, though not everything of which he's been accused.  But, after a long estrangement from his family, he's returned to Lonesome Bend, Colorado; drawn back by the land that's been in his family for generations and the family he's been away from for too long.  This time, he's determined to put down roots, carry his share of the load on the family ranch and mend fences with those he loves and has hurt, including the woman he walked out on seven years earlier.

Growing up in a series of foster homes, Carolyn Simmons has never known the love of a family, the security of a home of her own.  She thought she had found it - once - with Brody Creed but the rodeo cowboy disappeared from her life with all the finesse and stupidity of a clueless young man, leaving her heart in pieces.  Now he's back and asking for a second chance.  Only a fool would say yes and Carolyn is no fool.  But, no matter how hard she tries, she's never been able to find another man who makes her heart melt like Brody Creed.  Will granting him that second chance finally bring her heart's desire of a home and family of her own with the one man she's always been destined to love?


I enjoyed this trilogy.  Miller's stories are comforting reads for me and she rarely lets me down.  There were minor issues that occasionally pulled me from the stories (Steven and Connor both naming their sons Blue.  Carolyn knowing Brody's "secret" in book two but not knowing it in book three.)  but, overall, the writing was good enough to pull me back in.  I liked the main characters in all three books and found several likable secondary characters (Tricia's great-grandmother, her god-daughter, Steven's adopted son and dad and step-mom, to name a few) who added richness to the stories without detracting from the hero and heroine.  I've heard a few people complain about the presence of the rescued dogs in all three books, noting that they were too prominent in the stories.  For me, there was an important reason for the appearance of each of the dogs in the three stories and, being a long-time dog lover and "mom" of several rescues myself, I can only say that the experiences of the humans and their dogs (and cat) in the books mirrored much of my daily life and added an extra dimension to the stories that I found believable and enjoyable.

How do you feel about kids and pets having prominent roles in the romances you read?