Review - - The Duke Goes Down 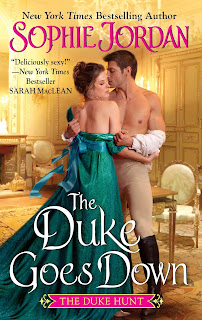 Peregrine Butler’s privileged blue-blooded world is rocked to the core when it is revealed he was born before his parents’ marriage and therefore is not the legal heir to the dukedom. Facing ruin, Perry must use his charm and good looks to win an heiress—all the while ignoring his fascination with the one interfering and alluring chit who is intent on sabotaging his efforts.

Everyone knows Imogen Bates, the virtuous daughter of the senile vicar. She can write a sermon in a day and spot a rogue in a second, so she sees right through Perry’s seductive façade. But Imogen’s plan to protect the heiresses of her beloved Shropshire from the erstwhile Duke of Penning, the bane of her existence since childhood, soon turns into something altogether unacceptable for the proper lady … who suddenly finds herself longing to keep his heated glances and tempting kisses all to herself.

The Duke Goes Down by Sophie Jordan is as provocative a read as the title cheekily suggests and was a five star read for me. This is the first book in what promises to be a very enjoyable series. It is an enemies-to-lovers story that brings together the vicar’s daughter, Imogen Bates, and Peregrine Butler, the Duke of - actually he’s no longer the Duke of Penning - he’s plain, old Mr. Butler now much to Imogen’s delight.

Peregrine, or Perry, was the bane of Imogen's existence when they were growing up. When Perry loses the Dukedom due to an accident of birth - it seemed that his parents anticipated their vows and made it to the church a bit behind schedule - he finds himself in a financial bind and must marry an heiress as quickly as possible. Shunned in London as a bastard he returns to what was his home seat of Shropshire to find himself an heiress. Imogen will not stand for it! To have one of her friends who happens to be an heiress live with such a boorish, though decidedly handsome, man is out of the question. Imogen starts off a volley of rumors about Mr. Butler.

Perry figures out who has been starting the rumors and confronts Imogen. He finds himself enchanted by a beauty that she tries to hide. They call a truce and find themselves drawn to one another. Imogen starts to see the good in him. And Perry starts to look at his once privileged life and what his life now could really be. Does he need a young woman who is an heiress that would enrich his coffers or the lady right in front of him that would more than enrich his life?

The Duke Goes Down is filled with witty banter, some pretty steamy scenes and will touch your heartstrings. I highly recommend this delightful read and look forward to more in the series. Remember how Perry lost his dukedom? Well, we still have yet to meet the new duke and Shropshire has a number of interesting characters that I, for one, would love to read more about.