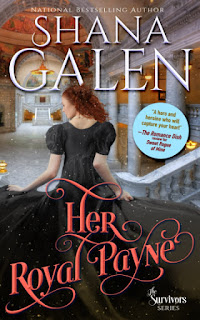 He’s a pain…literally.Rowden Payne, known as The Royal Payne, makes his living in the high stakes world of bareknuckle boxing. The disavowed son of a duke likes the focus boxing requires. It keeps his mind off the tragedies in his past. But just as he’s poised to knock out his biggest rival, he’s mesmerized by a pair of exotic hazel eyes in the crowd. He finds himself flat on his back and short fifty pounds.She’s a prude with a problem.Modesty Brown’s father has vanished. The strict minister has never disappeared before, and Modesty is left having to rely on elders of the church for help. But when she becomes a burden to them, she has to seek out her aunt, a woman of high rank. Modesty’s only way of finding her is by asking the only man she knows of that class—Rowden Payne. Unfortunately, she’s the one responsible for the Royal Payne losing his crucial fight.Sometimes the hardest hit is the one to the heart.Rowden doesn’t want to care for anyone or anything, but if he can just help Modesty find her father, he can be rid of her. Soon the revelation of her father’s secrets and lies puts Modesty, Rowden, and their friends in danger, and if Rowden can’t admit his feelings for Modesty, he’ll lose her forever.
PJ's Thoughts:
I should begin by saying that, yes, this is the 10th book in Shana Galen's The Survivors series but, no, you don't have to have read the earlier books to thoroughly enjoy this one. The 9th book, Sweet Rogue of Mine (read PJ's review) is the only other book in which Payne has a (secondary) role. However, The Survivors is one of my all-time favorite historical romance series and I do highly recommend all of the books.
After meeting Rowden Payne in Nash's book, I was curious about what type of heroine Galen would create for him. I have to admit, I never guessed it would be the prudish daughter of a puritanical, fire and brimstone preacher! But, as unlikely as that pairing may seem, these two are so good together, each being exactly what the other needs to fill their hearts with happiness. I loved Modesty's evolution as she throws off the yoke of perfection she's spent her life carrying and begins to discover who she is and what she wants. I adored Rowden, ached for his anguish over what he'd lost, and cheered for what he found with Modesty. I loved the caring between them, the humor, and the passion.
Leading a wonderful secondary cast of characters are Rowden's boxing manager, Chibale Okoro and London's most sought after dressmaker, Madame Renauld. Their romance was sweet, passionate, and definitely sigh-worthy. I loved seeing this successful Black couple prominently placed in the book.
Other secondary characters evoked a plethora of emotions, enriching the overall story. Highlights for me included Rowden's manservant, Trogdon (I could so vividly envision this character!), and former hero and heroine, Ewan Mostyn (still a man of few words) and Lady Lorraine (still a force to be reckoned with).
Shana Galen once again has created a world of passion, danger, brotherhood, and love that reeled me in and kept me engaged from beginning to end. Ten books in and I'm still eager for more.
Posted by pjpuppymom at 4:00 AM