Tour Review - - Return of the Scot 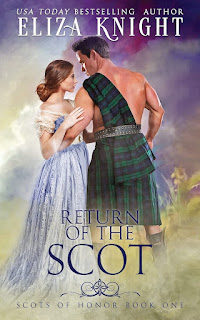 Scarred by the brutal ravages of war, Lorne Gordon, Duke of Sutherland returns to the Highlands to discover that his clan thought him long dead. His greedy half-brother has assumed his title, sold his family seat and disappeared with the fortune. Once he engineers the return of his title, he must convince the new estate owner to reverse the wholly legal sale with the promise that his half-brother, and the funds, will be found. However, that goal seems impossible when Lorne discovers the buyer is none other than his ex-betrothed’s sister.

After several humiliating attempts at securing a husband, Jaime Andrewson gives up on marriage and throws herself into her father’s business. She burns with vengeance towards the entire Sutherland family after their chieftain caused her sister’s fall from grace. Although she’d thought the man who betrayed her sister was dead, acquiring his property had been her main goal since taking over her father’s company. But with Lorne Gordon alive, vengeance is all the sweeter, for she desires only to watch him suffer.

Despite Lorne’s fury, he has to find a way to convince her to return what is rightfully his—even if he has to go so far as to marry her. Though out of practice with the arts of flirtation, there is one thing he does not lack—determination. With his pockets empty and a snarl on his lips, Lorne is determined to win her trust and her hand. When unexpected family secrets on both sides are exposed, Lorne realizes that wooing Jaime will be a bigger challenge than any of the other battles he’s ever fought, but it is one he refuses to lose.

Jaime is a very successful shipping businesswoman who has a reputation for being a sharp-tongued shrew and doing the opposite of what society expects of her, including: not marrying the first man who would have her, nor shunning her ruined sister, nor even giving particular deference to those in society with better standing than her like the Duke of Sutherland, the man who ruined her sister and left her with child. In fact, Jaime acquires the Duke’s castle when it is determined he is dead as a fitting act of revenge and rightful inheritance for her young nephew. However, her revenge is short-lived when the Duke of Sutherland comes back from the dead and is rather annoyed to learn his castle has been sold out from under him.

Lorne, the Duke of Sutherland, has his hands full trying to get his rightful property back while working with the shrewish younger sister of the woman who tried to betray him with another man. He is understandably not keen to keep associating with this particular family due to prior history, but Jaime seems keen to make sure Lorne doesn’t get any advantage--and seems to think he took advantage of her sister and left her. However, being Lorne doesn’t have the money to pay back Jaime for the original purchase of his property, his other option is to woo and marry Jaime to get his castle back.

As the two are forced to interact with each other and also work together to find the whereabouts of their siblings who could solve several mysteries that keep popping up, Jaime finds herself very attracted--once again--to Lorne; and Lorne finds that wooing Jaime would have less to do with getting his property back and more about getting Jaime in his arms forever. If only they could trust each other….

This story is very tightly written, well-detailed, and immersive with likeable main characters as well as fun and amusing secondary characters (aside from the villains, obviously). Sometimes the scenes showing a natural progression of the intimacy between the main characters felt a little choppy or perhaps slightly out of step with the emotions or behaviors of the main characters in the prior scene--like how sometimes in an action movie, something dangerous happens and they’re running for their lives, then they decide to kiss each other and you’re like, Is now the time? There was a little of that here for me--it didn’t feel as smooth as it might have been. However, I think this is a frequent issue with “enemies to lovers” storylines--they’re so busy fighting, I sometimes get confused why anyone is kissing. If this is a trope you enjoy, you may not find the same issues with it that I did.

I think this is a good start to the series (Scots of Honor) and I look forward to reading the others in this series (since I suspect they are likely the secondary characters who will be coming out to play.) And I think Eliza Knight will give each of these men of honor a heroine worth fighting for--and I have no doubt each of these women will be bold, tart-tongued, and brilliant. If you enjoy reading Scottish set historicals with sassy heroines and glowering dukes, I believe you will find this an enjoyable read.