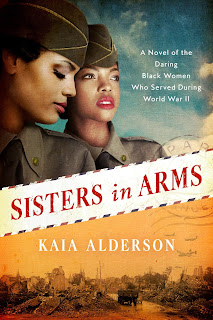 Grace Steele and Eliza Jones may be from completely different backgrounds, but when it comes to the army, specifically the Women’s Army Auxiliary Corps (WAAC), they are both starting from the same level. Not only will they be among the first class of female officers the army has even seen, they are also the first Black women allowed to serve.

As these courageous women help to form the 6888th Central Postal Directory Battalion, they are dealing with more than just army bureaucracy—everyone is determined to see this experiment fail. For two northern women, learning to navigate their way through the segregated army may be tougher than boot camp. Grace and Eliza know that there is no room for error; they must be more perfect than everyone else.

When they finally make it overseas, to England and then France, Grace and Eliza will at last be able to do their parts for the country they love, whatever the risk to themselves.

Based on the true story of the 6888th Postal Battalion (the Six Triple Eight), Sisters in Arms explores the untold story of what life was like for the only all-Black, female U.S. battalion to be deployed overseas during World War II.

This was a part of WWII history I was never taught in school and I enjoyed learning about it through Sisters in Arms. Alderson did a good job of bringing these characters to life, illustrating the challenges and inequities they faced, both as women and as women of color. And those challenges didn't only come from the Caucasian military. The obstacles they had to overcome in order to serve their country originated in their Black families and communities as well. They truly were trailblazers.

Overall, I thought the author did a good job of showing both the overt as well as the subtle racial aggressions these women were subjected to - at boot camp, after being commissioned, and when out in the communities - and how that impacted the evolution of these characters. Knowing many of the incidents were based on actual events and people made them all the more raw, realistic, infuriating, and heartbreaking. They also provided the opportunity to explore the resilience, strength, and evolving maturing of Grace and Eliza throughout their journey. The women who returned home following their service in Europe were vastly different from the girls who impulsively applied to serve their country.

While the pace of the story was steady and kept my interest engaged, I eventually grew a bit tired of the petty personal differences between Eliza and Grace. There were more than a few times when I wanted to tell them to grow up (they do...eventually). Also, the ending seemed rushed and open ended. By that time, I had become invested in these two women. I wanted more information about their lives following their return. Though hints are dropped and the ending is hopeful, I guess I wanted that package wrapped with a big bow of details. Overall though, Sisters in Arms was a solid read detailing an important chapter in our history and putting college-educated, hard-working, vulnerable, but determined, Black female faces to the historical facts. I recommend it.