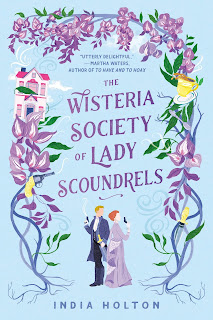 Cecilia Bassingwaite is the ideal Victorian lady. She's also a thief. Like the other members of the Wisteria Society crime sorority, she flies around England drinking tea, blackmailing friends, and acquiring treasure by interesting means. Sure, she has a dark and traumatic past and an overbearing aunt, but all things considered, it's a pleasant existence. Until the men show up.

Ned Lightbourne is a sometimes assassin who is smitten with Cecilia from the moment they meet. Unfortunately, that happens to be while he's under direct orders to kill her. His employer, Captain Morvath, who possesses a gothic abbey bristling with cannons and an unbridled hate for the world, intends to rid England of all its presumptuous women, starting with the Wisteria Society. Ned has plans of his own. But both men have made one grave mistake. Never underestimate a woman.

When Morvath imperils the Wisteria Society, Cecilia is forced to team up with her handsome would-be assassin to save the women who raised her--hopefully proving, once and for all, that she's as much of a scoundrel as the rest of them.

This book is funny. It is both funny ha ha and funny weird--and it delights with its language, author voice, and shenanigans. It also defies labels, comparisons, and explanation, because despite the blurb above, it does not touch on the arm’s length of anachronistic quips and issues that may bother a regular reader of historical romance. My first word of advice: suspend belief and just go with the flow. Let the book delight you with its inanities.

If I were to attempt to define this book with a label, comparison, or explanation, I would say: Imagine, Dear Reader, a romantic action adventure novel written by Eloisa James and Terry Pratchett’s Love Child, and you’d come close to capturing the exquisite vocabulary and historical immersion into Victorian England (i.e. don’t mention things like legs--that’s vulgar) and the antics and asides that are very tongue-in-cheek from writer to reader. This Victorian setting with proper ladies and tea parties has a very Discworld feel with its casual witchcraft, flying houses, and charming pirates with questionable moral codes.

The women of the book--and there are many--are all very determined, brilliant, and courageous. They have the best lines; they frequently slam the door in men’s faces; and think nothing of living their best life. The main male character of the book, Ned Lightbourne, is a delightful mix of alpha and beta (if you label your heroes in such a way), and watching him try to keep up with the irresistible Cecilia Bassingthwaite is a hysterical lesson in futility. Aunt Darlington and Aunt Armitage are comical adversaries who are constantly trying to assassinate one another, yet are also best friends. There are many more, each their own character and delightful in their way--except for the villain, Morvath, but that can be excused.

For me, the fantastical aspects of the book overpowered the historical elements that I normally like more, so while this book was very fast-paced, action-oriented, and laugh-out-loud funny, I also found it too easy to put the book down and watch episodes of HGTV because it required less brainwork and more realism. Therefore if you’re a person who prefers their “escapist” readings to be less escapist in the sense of realism and historical accuracy, this book may also be a bit of a struggle for you to read, even if you are equally amused by it. If, however, you prefer your stories to be truly escapist with heroines who pass the Bechdel test handily, you will highly enjoy this book. For a beach read, I think it definitely ticks all the boxes for a book that should go in your suitcase.