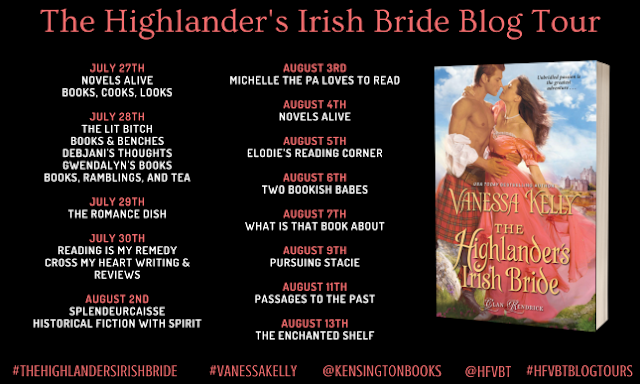 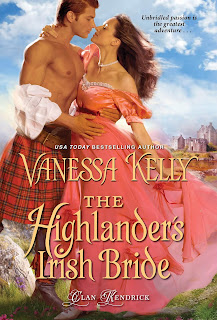 Miss Kathleen Calvert may be the daughter of an Irish aristocrat, but she has no intention of acting like one. All she desires is to return to her family’s estate to raise horses and manage her father’s magnificent gardens. But when a scandal threatens her reputation, her parents order her to a remote Scottish estate, hoping she will finally learn to behave like a proper lady. To make matters worse, her escort is a handsome Highlander who just happens to be the most boring man in all of Scotland . . . After a youth of dangerous and wild escapades, Grant Kendrick surprised his family—and himself—by becoming a successful businessman and the most respectable Kendrick brother. But does that matter, when the beautiful and free-spirited Kathleen deems him a stodgy bore? Luckily, he gets the chance to prove her wrong when their carriage is ambushed by thieves. But it will take all his ingenuity to protect the beautiful lass who has stormed her way into his heart—and to convince her that a life with him will be a love-filled adventure . . .
PJ's Thoughts:
Vanessa Kelly takes readers back to Scotland for another adventure with her boisterous, meddling, and loving Kendrick clan. This time, it's twin Grant who finds himself on an unexpected journey to love with an Irish lass with a penchant for finding trouble.
When Kelly's Kendrick family is involved, I can be assured the story will be overflowing with adventure, mischief, humor, family, romance, and fun. This fourth book certainly has all of that. I enjoyed the slow-burn relationship between Kathleen and Grant. The progress of their relationship is very gradual, allowing them the time to move from acquaintances to friends to more. I liked the way they challenged one another and how each of them evolved over the course of the book. There's a sweetness to their love, along with the fire. They bring out the best in one another as, together, they are finally able to grow into their authentic selves, the people they were meant to be.
There is a rather large secondary cast of characters in the story, featuring many of the Kendrick family, which is always fun for fans of the series, as well as secondary characters from Graeme's book, The Highlander's English Bride, and new ones including an especially nasty villain.  A special treat for me was the appearance of Gillian (My Fair Princess), one of my favorite Kelly heroines. She always livens up a story! Unfortunately, there was also a prominently featured character I did not enjoy: Kathleen's sister, Jeannie, an annoying, self-centered, sixteen-year-old who acted more like a spoiled, selfish child than a young woman. She dominated the story with her antics, to the point where, for me, every scene she was in overshadowed the other characters and not in a positive way. She finally redeemed herself but by then I didn't care. Others may feel differently about her but, for me, every appearance by her drained more of my pleasure from Grant and Kathleen's story. I understood her character's purpose in the overall story but I just wanted her gone.
The mystery was well plotted and even though I guessed the villain pretty early on I was still kept in suspense as to how it would all play out. The first half of the book was a slow build but the pace really picked up in the last half with both the action and romance racing to another satisfying Kendrick conclusion.
While I don't think you have to read the entire series to fully enjoy The Highlander's Irish Bride (though I loved them all), I do recommend reading at least The Highlander's English Bride as the characters, setting, and storylines from that book feature prominently in this one.
There are two Kendrick brothers left and I am eager to discover what kind of adventure, laughter, and romance Kelly has in store for them.
The Highlander's Irish Bride 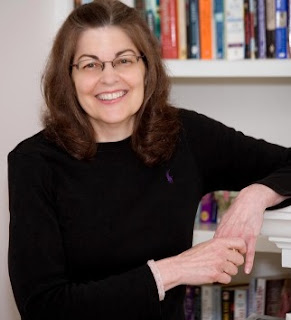 Vanessa Kelly is a USA Today Bestselling, award-winning author who was named by Booklist, the review journal of the American Library Association, as one of the “New Stars of Historical Romance.” Her Regency-set historical romances have been nominated in a number of contests, and she has won multiple awards, including the prestigious Maggie Medallion for Best Historical Romance. Her books have been published in nine languages.

Vanessa’s first Clan Kendrick book, The Highlander Who Protected Me, was a USA Today, Barnes & Noble, and BookScan bestseller. The Highlander’s Christmas Bride, her latest book, hit the top 50 on both the Barnes & Noble mass-market bestseller list and on BookScan. The Renegade Royals Series was a national bestseller, as was The Improper Princesses Series. My Fair Princess was named a Goodreads Romance of the Month and is a USA Today and BookScan bestseller.

When she’s not dreaming of plots for her next Regency novel, Vanessa is writing USA Today Bestselling books with her husband, under the pen name of V.K. Sykes.

You can find Vanessa at vanessakellyauthor.com or at vksykes.com. For all of Vanessa’s latest news and contests–and to receive a free story–please sign up for her newsletter on her website.