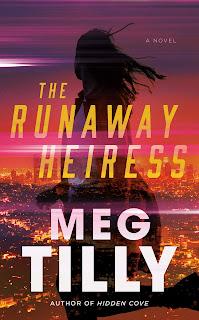 Sarah Rainsford has been on the run for more than three years. She's changed identities yet again in hopes of throwing her violent estranged husband, a police lieutenant, off her trail. Since she's still legally married to him, and he is willing to bend any laws to get his hands on her inheritance, he'll stop at nothing to locate her.With a new name and fake ID papers, she lands a job as a personal assistant to none other than Hollywood's golden boy director Mick Talford. He's a difficult client but she senses hidden depths to him. Once Mick and Sarah combine forces in a desperate attempt to keep Sarah out of harm's way, they build a strong bond . . . but with danger trailing them, is it enough to keep them both alive?
PJ's Thoughts:
I recommend clearing your schedule before beginning The Runaway Heiress. Once I started, there was nothing that was going to pull me away from this book until I reached the final page. Meg Tilly lured me in with fully-formed, vividly-depicted characters in whom I quickly became invested. Then she threw them into a fast-paced, increasingly escalating, life-or-death journey that engaged all of my emotions. Finally, she wrapped it all up in a tightly-constructed plot, with numerous unexpected twists, that had me on the edge of my seat, trying to guess what would happen next, until the very end. What a ride!
Tilly is a gifted writer, one who can bring words on a page to life as stunning visuals in my mind. I could so clearly see everything play out like a film reel as I read the story; could feel the deepening emotions, the escalating danger, smell the fear, anger, and frustration of the characters, both good and evil.
While the compelling, suspense portion of the book kept me on edge, it's nicely balanced by what turns out to be a very sweet romance, with plenty of sizzling chemistry, snappy banter, and emotional vulnerability. I really liked Mick and Sarah together. They were both good people, hiding their true selves for different reasons. I loved that they could see one another so clearly, almost from the first time they met. Their relationship was surprising in some ways, endearing in others, and definitely sigh worthy. I loved the foundation of friendship that developed between them, the emotional support each offered the other, the chemistry that finally refused to be denied, and the hard-earned, happy ending they both deserved.
The Runaway Heiress is loosely connected to Tilly's Solace Island series but this thriller can be fully enjoyed on its own without having read the earlier books (though I recommend those as well).
Posted by pjpuppymom at 2:00 AM