Tour Review - - Under a Sicilian Sky 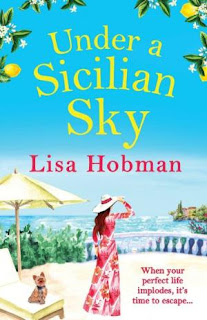 Global box office sensation, Ruby Locke, is a long way from her Yorkshire roots. Together with her fiancé, movie heartthrob Tyler Harrison, they are Hollywood’s new glitterati.

Overnight, however, Ruby’s life implodes when her social media accounts are hacked with a multitude of vile posts, turning her into an international pariah. Even Tyler breaks off their engagement.

Confused and heartbroken, Ruby escapes to the beautiful island of Sicily to avoid the media scrutiny and clear her name. With only a Yorkshire Terrier to comfort her, Ruby is befriended by a handsome neighbour and slowly begins to heal.

But who is this mysterious man and what are his intentions?

When her Sicilian hideaway is compromised, Ruby is once again forced to relocate, this time to the stunning Isle of Skye.

In the tranquil cove of Glentorrin, Ruby is left questioning not only who wants to destroy her career, and why but also if celebrity lifestyle is really for her...

Stuck at home dreaming of spending your summer on the golden shores of Sicily? Or, perhaps, tucked up in a cozy cottage on Scotland's Isle of Skye? Lisa Hobman's Under a Sicilian Sky takes you to both places from the comfort of your own living room, with vivid descriptions that left me feeling like I was right there with her characters as they explored both Sicily and Skye.

This was my first book by Hobman so I wasn't quite sure what to expect. What I discovered was plenty of adventure, a bit of a mystery, slow-burn romance, friendship, substantial character growth, and emotional depth. It took me a while to warm up to Ruby, which is why the second half of the book (in Scotland) was my favorite. By that point in the story, she'd learned some hard lessons, begun to mature, and was beginning to take control of her own destiny. I very much enjoyed the friendships she made on Skye and the female support she received when things started to go sideways. There's also a surprising, and consistent, source of comfort and support that comes from a small group of individuals back in the U.S. I'm being purposely vague to avoid spoilers but I loved those people. I also enjoyed the mystery that's woven throughout the book and the fact that the author was able to keep me on my toes with twists and turns along the way that held some unexpected surprises.

By the end of the book, I was happy with the person Ruby had become, cheered her choices, was confident in the happy future that awaited her both personally and professionally, and even more eager to visit Scotland.

If you're looking for a summer read that will take you to foreign shores, introduce you to intriguing characters, and enmesh you in a ripped-from-the-headlines mystery that could easily happen to any of us on social media, give Under a Sicilian Sky by Lisa Hobman a try.