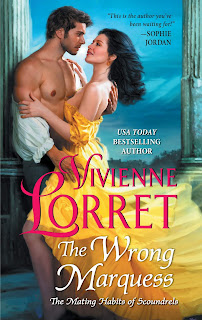 Elodie Parrish can feel spinsterhood breathing down her neck. That’s the trouble with waiting for the marquess next door her entire life. But Ellie knows if she gives him one last Season, he’ll finally propose. The only problem is, her path keeps crossing with the arrogant Lord Hullworth, who is convinced she has designs on him.

Brandon, Marquess of Hullworth, never wanted to be “London’s Most Elusive Bachelor,” or have a horde of hopeful debutantes and their scheming mamas follow him around. His past has left him too jaded to consider marrying any of them. At least, that’s what he thinks... until he meets Ellie. She’s quirky, opinionated, blushes easily, and drives him absolutely wild. The only problem is, she believes she’s in love with someone else.

Ellie never imagined that one sultry summer could change everything. But the more time she spends with Brandon researching her book on the mating habits of scoundrels, the more she starts to fall for…

Vivienne Lorret has done it again! The Wrong Marquess is a five-star romance regency romp! Elodie Parrish has had her life all mapped out ever since she was 7 years old and her neighbor George sat with her at her father's graveside. He assures her that as a marquess, and her friend, he will always be there for her and in the natural order of things they will wed. However, at five and twenty - with spinsterhood closing in on her - George has not come around to make good on his promise. Hope springs eternal and Elodie and her aunts just know the next time George flitters by will be the day he  goes on bended knee.

In the meantime, Elodie encounters no less than three proposals in one day at the one picnic George promised he’d attend! Mortified to have interrupted these couples, she rushes to get back to her aunts and keep them from pilfering recipes from the hostess's kitchens. Sneaking through the hedges, she barrels into the solid chest of this season's elusive bachelor, arrels into the elusive marquess and this season’s elusive bachelor, the Marquess of Hullworth. Every dew-eyed debutante and mother has him in their sights. Naturally, he thinks she accidentally stumbled into him on purpose like so many others have done. He thinks she's an opportunist. She thinks him rude beyond measure.

The thing is they keep running into one another even amid all the other debs fluttering their eyelashes at him, dropping their handkerchiefs at his feet or "spraining" their ankles. It doesn’t help that his sister Meg and Elodie have become fast friends and that all her mishaps have been real. So despite lost handkerchiefs (he keeps one she embroidered for him in his coat pocket, I KNOW!), her fears and phobias, rampaging zoo animals, hot air balloon mishaps, Ellie’s quest to help her banished friend Prue and a suddenly attentive George - as self-centered as ever - Brandon and Ellie fall in love. They don’t admit to it at first and Ellie fights it because the elusive marquess is the wrong marquess. Or is he?

I laughed out loud and sniffled in equal measure while watching this story unfold. Each book in this series is a gem and this one is a diamond of the first water embroidered on the corner of a linen handkerchief. Fear not, you can read this as a stand alone and not miss a bit. I look forward to Prue’s story as the next contributor of The Marriage Habits of the Native Aristocrat.
Posted by pjpuppymom at 6:00 AM