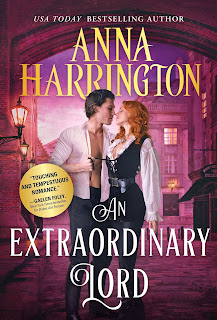 Soldier turned solicitor Lord Merritt Rivers has dedicated his life to upholding the law. He patrols the streets faithfully, hoping to stop crimes before they can happen. While hunting an escaped convict, he encounters a woman also hunting thieves. She's a delicious distraction, until he discovers that she is the criminal he's after. She's smart, challenging, and everything he finds attractive, but he cannot trust her.

Veronica Chase has hidden her past as a nobleman's daughter. She confesses to a crime to keep her adopted brother out of prison. She now lives in London's underworld, trapped between worlds, belonging nowhere.

Forming an uneasy alliance, Veronica and Merritt work together to protect innocent Londoners during the city's riots. Moving between her world and his, they grow closer to each other and to the mob's dangerous leaders. But their newfound trust won't be enough, until each face their demons and ask what's worth saving—the lives they've chosen to lead or the love that leaves them yearning for more.

Anna Harrington’s An Extraordinary Lord has one of the most intriguing openings I’ve read in a long time. We immediately learn that the hero has been made a baron and isn’t happy about it. He does tell us what earned him this honor but not why it’s unwelcome. We also learn he’s a barrister who’s hunting an escaped convict the Home Office believes has information about riots that are causing havoc across the city. That’s only part of his goal, however. This assignment gives him cover for prowling London at night on a mission of his own, a personal one driven by old pain.

In short order, he meets the heroine, a female thief-taker, a person who nabs criminals and brings them in for rewards. He first sees her when she’s holding a thief at knife-point. She’s also dressed in trousers and wearing a sword. The attraction between them is immediate and sets up engaging banter that lasts through the book. Both the banter and the attraction continue as they literally fence in a dark alley.

Unfortunately, she reveals her identity, and he arrests her. He offers her a bargain. If she’ll help him uncover those behind the riots, he’ll see that she receives a pardon. If she won’t, she goes back to Newgate. Her situation is more complex than he knows, but she withholds the truth to protect someone important to her.

As they talk, Veronica learns the riots are not merely unhappy people expressing their anger but may have a darker purpose. She agrees to work with Merritt, intending to earn her pardon, keep her secrets, and fade back into the life she knows.

As they work together, the attraction between them deepens into respect, affection, and finally love. The emotional scars that keep them apart are strong and credible, and the story forces them to confront those issues in ways that fit with their established characters. When they finally open up to each other, they begin to grow past their barriers instead of vaulting them immediately after their revelations. They were easy to root for.

Veronica and Merritt work together with his friends as the plot about the riots comes to its head. They thwart the plotters in a clever way that works well within the story.

The tale moves between the London rookeries and the ballrooms of the ton, with information on how London’s poor lived that adds depth and texture to the world. The supporting characters, ranging from Filipe, who offers shelter for those in need in the rookeries and Madame Noir, a brothel keeper, to Merritt’s former army comrades, his friends in the ton, and his barrister father, are well rounded and interesting.

One thing I always consider when I pick up a book that’s part of a series but not the first volume is whether the book is a good jumping-on point. An Extraordinary Lord works well for a new reader, primarily because Harrington offers enough information about Merritt’s friends and their base, The Armory, to make them interesting and sympathetic without bogging down the story with introductions.

I did have some problems with the story. Veronica introduces Merritt to Felipe as someone who needs shelter for his family and can help with the criminal enterprises that fund his sanctuary. Merritt says he’ll move his wife and children in the next day. He never does, and no one ever calls him or Veronica on that. Much is made of how slow Filipe is to trust, but he never questions her on why this supposed new person doesn’t go return to the haven or move his family into it. I would’ve liked to see that addressed in some way, even if it was as simple as Veronica telling Filipe Merritt got a better offer.

I also had difficulty accepting that Merritt, who is obviously well connected in society, needs the unknown Veronica to question a woman about who was using her coach at an important point in the story.

About a quarter of the way through the story, there’s a heavy makeout session in a small boat crossing the Thames even though Merritt and Veronica don’t yet trust each other. Reader preferences vary, but for me, that’s early to be so hot and handsy. Especially since they’re groping each other with the boatman a few feet away.

At one point, Veronica refuses to do what Merritt wants, so he hauls her over his shoulder and spanks her twice. Heroes hauling heroines around physically when they’re not in danger bother me, and I really don’t like heroes spanking heroines who don’t do what the heroes want.

At the end of the book, when the confrontation with the rioters occurs, we’re told the military barricade intended to stop them is placed where certain streets come together. But we’re told nothing about what else is at that intersection, and a reader unfamiliar with London in 1816 has no mental image of the surroundings.

Despite my quibbles, however, I liked the characters a lot and found their story and the series premise engaging. I  enjoyed the book overall and recommend it highly.