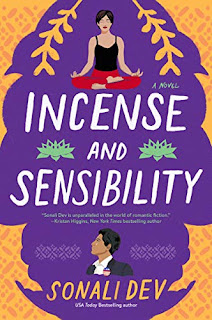 Yash Raje, California’s first Indian-American gubernatorial candidate, has always known exactly what he wants—and how to use his privileged background to get it. He attributes his success to a simple mantra: control your feelings and you can control the world. But when a hate crime at a rally critically injures his friend, Yash’s easy life suddenly feels like a lie, his control an illusion. When he tries to get back on the campaign trail, he blacks out with panic.

Desperate to keep Yash’s condition from leaking to the media, his family turns to the one person they trust—his sister’s best friend, India Dashwood, California’s foremost stress management coach. Raised by a family of yoga teachers, India has helped San Francisco’s high strung overachievers for a decade without so much as altering her breath. But this man—with his boundless ambition, simmering intensity, and absolute faith in his political beliefs—is like no other.

Yash has spent a lifetime repressing everything to succeed, including their one magical night ten years ago—a too brief, too bright passion that if rekindled threatens to destroy the dream he’s willingly shouldered for his family and community . . . until now.

Complex, thought provoking, and deeply emotional, Incense and Sensibility kept me reading late into the night. Then, when I turned the final page with a heart-felt sigh, all I wanted to do was return to the beginning and read it all over again, slowly this time so that I could fully savor the depth and beauty of Sonali Dev's words.
I have fully enjoyed the other books in The Rajes series but this third one was my favorite. There's just something about India and Yash that spoke to me. Yes, it's true that I love a second-chance romance but this book is about so much more than that. It's rooted in family, culture, service, loyalty, and in pursuing not only what's in the best interest of others but in our own best interest as well.
I enjoyed the dynamics within both families and how India's and Yash's journeys were interwoven with them, with side-story threads bringing additional complexity and richness to the main plot without detracting from it. I loved what Yash stood for, admired his genuine dedication to public service, understood his reasons for past decisions (even if I didn't agree), and fully understood the inner turmoil those decisions caused. I adored India. I wanted to be friends with her, take her yoga class, just hang out with her. She and Yash are so good together, as if they had each been created for the other. I was pulling for them the entire way, through some pretty big obstacles.
I highly recommend adding Incense and Sensibility to your summer reading list. Like the previous books, it can be enjoyed on its own but if you choose to begin the series here and enjoy Raje's story, I encourage you to also check out his sisters' stories in Pride, Prejudice, and Other Flavors (book one - Neurosurgeon Dr. Trisha Raje and Chef DJ Caine) and Recipe for Persuasion (book two - Chef Ashna Raje and soccer star Rico Silva). If you haven't already guessed from the titles, yes, these books are present-day stories inspired by the novels of Jane Austen. And, they are not to be missed.
Posted by pjpuppymom at 6:00 AM