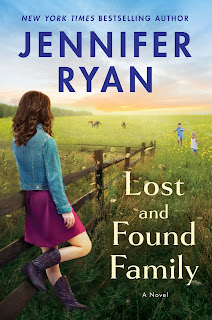 As Sara Anderson drives up to the house in Carmel, she knows she’s on an impossible quest to make peace with the one person who truly hates her. For years, Sara has hidden the truth about her late husband’s lies from their children and their grandmother. When her mother-in-law, Margaret, threatens her with legal action to see the boys, Sara strikes a bargain: she’ll bring them for a six-week visit, hoping the boys, at least, will find connection and happiness with their extended family.

It doesn’t help that attorney and part-time rancher Luke Thompson lives right next door, and as an old friend of the family’s he’s agreed to investigate Sara’s past. Luke doesn’t feel comfortable poking around in the very successful tech CEO’s private life. What he finds is a truth very different from the one he’s been led to believe. Far from being cold and unloving, Sara is devoted to her boys and as at home on the ranch as she is in a boardroom.

All Sarah ever wanted was a family, and all Luke wants now is her love. The time has come to reveal the terrible secrets that have been kept for so long. In losing the past, a new love—and family—can be found.

I first discovered Jennifer Ryan through her romantic suspense novels but I've come to enjoy her stand-alone, women's fiction stories as well. Ryan is a master of the dysfunctional family unit, creating characters that draw you in and keep you engaged while immersing the reader in twisty stories that are overflowing with secrets and betrayals.

Sara, the lead character of this book, is a hard-working mom trying to maintain a balance while growing her successful company and caring for her two young sons. I liked her, respected her, admired her, and was cheering her on from start to finish, especially in light of the verbal abuse and casual disregard she endured from her late husband and his family. How that woman came through all that was thrown at her - from childhood to present day - with her positivity, kindness, and ability to forgive intact, not just surviving but thriving, is beyond me.

I like that Luke's suspicion of Sara (fed by her mother-in-law) isn't drawn out a long time. Once true facts come to light, his allegiance shifts and a relationship begins to develop, not only with Sara but with her sons as well. I really enjoyed the scenes between Luke and the boys. Luke is at a bit of a crossroads and has an individual journey to travel as well. I enjoyed the evolution of his character and his relationship with Sara. And I adored his family!

The story moves along pretty well until it hits about the 80% mark, when it began to slow down for me. Though I understand what the author was trying to convey in those final chapters, they felt a bit extraneous to me. Still, Lost and Found Family is a complex, deeply emotional, and satisfying story that reinforces Jennifer Ryan's immense storytelling skill and a book I recommend.