Review - - Welcome Back to Rambling, Texas 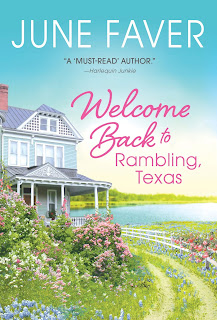 Reggie Lee Stafford is a hometown girl living in Rambling, the town in Texas Hill Country where she grew up. As a single mom, her world revolves around her young daughter and her great job writing for the local newspaper. But her peaceful life is turned upside down when Frank Bell—the bane of Reggie's teenage existence—returns to town to claim his inheritance.

Now, Frank is the owner of the local paper where Reggie works. Reggie can't imagine going to work every day and seeing her old nemesis. Frank seems intent on apologizing, and if he plays his cards right, he might be able to make up for having been such a jerk when they were young. But Reggie has more than her own reputation to protect this time, and Frank is going to have to pull out all the stops to prove he's worth a second chance.

Welcome Back to Rambling, Texas by June Faver is a 5 star read for me. It is an enemies-to-lovers story that ticks off all the boxes for me. Hot guy returns to small town to find the girl that he crushed on in high school was still around. Still as aloof and still as beautiful and, interestingly, in his employ.

Frank Bell left Rambling as soon as he graduated high school, went to law school and quenched his wanderlust by traveling the world, buying, turning around and selling businesses. No moss was going to grow on this rambling man.

Reggie Lee Stamford worked for the local newspaper The Rambling Gazzette, helped her dad out at his store, married a guy from high school who walked out on her and their daughter. The town of Rambling means everything to her. She loves every part of it. Her roots are here and her life is peaceful.

Until Frank Bell strolls back into town looking to have grown up very nicely indeed and not two minutes of seeing her again calls her by the nickname he gave her back in high school as retaliation for laughing at the New Boy. He’s back to take care of his late great aunt’s estate. He doesn’t plan to stay long at all which suits Reggie just fine. But as their paths cross again and again it soon becomes clear that there is a chemistry there. Can Reggie, her adorable daughter and a seemingly not for profit newspaper be just the things that take root in Frank’s heart?

I smiled throughout this book and really enjoyed it. It has all the hallmarks - if you will - of delightful romance movie! Great fun!

Have you read any June Faver books?

Do you enjoy small-town romances?

Who are some of your favorite authors writing in the small-town arena?

One randomly chosen person who posts a comment before 11:00 PM, July 6 will receive a print copy of When to Call a Cowboy by June Faver.