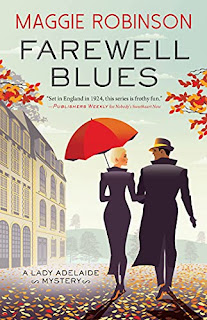 The Society Scandal of the Season...

Lady Adelaide Compton had prepared herself to say goodbye forever to Detective Inspector Devenand Hunter. It would be a welcome relief not to get mixed up in any more murders, even if it meant never working alongside the handsome detective again...wouldn't it?

But then Addie's prim and proper mother, Constance, the Dowager Marchioness of Broughton, is accused of murdering her secret lover, and there can't be enough gentlemen detectives on hand to find the truth. The dead Duke of Rufford appeared to lead a blameless life, but appearances can be deceiving. And unless Addie and Dev work together, Constance will hang—which is no one's idea of a happy ending.

If you've been following my reviews, you know how very much I've enjoyed the first three books in this delightfully entertaining, cozy mystery series. Maggie Robinson brings Addie's journey to a close with this fourth, and final, book in the series and I admit, I've grown immensely fond of these characters (yes, even Rupert). However, as difficult as it may be to bid them adieu, surely Rupert has done enough to earn his wings by now and Addie should be able to joyfully live out her life without her late husband looking over her shoulder. But first, there's another murder mystery to solve and this time Addie's mother is at the heart of it. How ironic that Dev is the one Addie's mother turns to when all of London is convinced of her guilt.

Farewell Blues is another page turner that, once I began reading, was impossible to put down. Humorous, suspenseful, witty, and poignant, this story was a wonderful farewell to one of my favorite recent series. The mystery is tightly plotted with a myriad of twists, turns, and possible suspects that kept me guessing (about both the murder and Dev and Addie's HEA) right up until the reveal. If you've been reading the series, you know there are also a couple secondary (potential) couples who have also been traveling a twisty path. Never fear, Robinson neatly ties up all three relationships in a manner that left me sighing happily.

The mystery in each of the four books of this series stands alone so you don't have to read the books in order. However, to watch Addie's evolution play out in real time, as well as the progression of her relationship with Dev, and the ghostly Rupert, you may want to begin with book one: Nobody's Sweetheart Now. Whichever way you choose to read them, I predict you will have a rollicking good time!

I'll also add that I don't know what Robinson has planned next but I do hope she will return to this cozy mystery genre at some point. She clearly has a gift for this type of writing.

Thanks so much to PJ and the Romance Dish for having me on this bittersweet occasion. Farewell Blues is the fourth and final Lady Adelaide Mystery, and I’m kind of sad about it. I’ve been with the same characters through four books, and I’ll really miss them. When I was writing four different historical romance series, the cast changed for each book/novella. As much as I loved all thirty-two (!) heroes and heroines, Addie, Dev and Rupert have worked their way indelibly into my heart.

People always ask, “Where do you get your ideas?” and I can honestly say I haven’t a clue. This is not so great for a mystery writer, LOL. I always wanted to write cozies (no suspenseful tension or gore for this scaredy cat), but wasn’t sure I could plot one. I usually never plotted anything, just sat down at the computer and…stuff happened.

That was fine for my romances, but mysteries need more structure. Like Hansel and Gretel, somebody needs to drop the clue breadcrumbs through the forest. Somebody has to be the baddie. Somebody else has to look like the baddie to trick you, gentle reader. Somebody else, poor thing, has to die.

Much to my surprise—and Addie’s—her husband Rupert turned up on the first page of Nobody’s Sweetheart Now, and Rupert was already dead. Yes, it seemed I was writing a ghost book, which I hadn’t planned to do at all. I’m not really a paranormal person, but Rupert didn’t care. He was there and I had to deal with it. Which, I think, I did, and had a lot of fun along the way redeeming him. And that was the dilemma. Rupert helped solve murders and saved lives, unbeknownst to handsome Scotland Yard detective Dev Hunter, and became pretty darned efficient. Why wasn’t he on his way to Heaven after all his good deeds? Rupert began to complain, and was justifiably tired of wearing the same pinstriped suit he was buried in through four books.

So the series had to wind up and give him his celestial wings and a fresh set of underwear. And being a reformed romance writer, I thought everyone else needed a happy ending too. So Addie and Dev, her sister Cee, and cheeky maid Beckett all get their HEAs. I hope you’ll agree!

In your opinion, how many books should the “perfect” series have? What’s your favorite long series?

Today's giveaways are brought to you through the generosity of today's featured author, Maggie Robinson. Thank you, Maggie! Winners will be randomly chosen from comments posted before 11:00 PM, September 18.

One commenter will get a signed trade paperback of Farewell Blues (U.S. only).

One commenter will receive a download of Farewell Blues.

One commenter has their choice to download any previous book in the series: Nobody’s Sweetheart Now (Book 1), Who’s Sorry Now? (Book 2), or Just Make Believe (Book 3). All can be read as stand-alones.