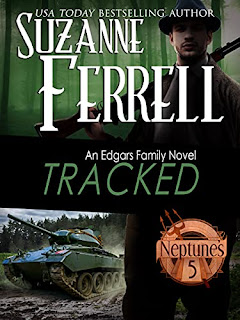 November 1941.America remains politically neutral in the war rocking the rest of the world. In the background, government and military leaders are preparing for the inevitable by shoring up the Army and Navy.A cryptic messageArmy codebreaker Ruth Haynes, daughter of a retired colonel, recognizes the code she and her brothers created as children. One brother, a spy for the British, is warning her of a Nazi plot to sabotage the 2nd Armored Division during secret war maneuvers, the same division where his twin is a gunner on a tank. When her attempts to alert both the Army and the State Department of the imminent danger meet deaf ears, she goes to her friend Sophie and the Neptune’s Five team for help.His missionKnown by the locals as ghost, Sean “Scout” Hanahan grew up poor in the mountains of Kentucky silently hunting for prey to feed his family. The youngest member of the spy-chaser team, he functions as both their tracker and sniper. When Neptune assigns him to shadow the little lady codebreaker, he saves her from dangerous men on her trail. As the pair team up to search for the saboteurs, her safety is now his first priority.Danger draws nearAs storm clouds of war near the shores of America, can Ruth, Sean and the team uncover the traitor in their own government and stop the spies before lives are lost?
PJ's Thoughts:
Suzanne Ferrell returns with another page-turner in her 1940's, Neptune's Five, romantic suspense series and I couldn't be happier. The months leading up to America's entry into WWII were tumultuous times in both our nation's capitol and all along the country's eastern coastline. Ferrell captures the intensity, fear, and confusion of those times as a secret, military spy-chasing unit works against time to ferret out deadly spies and traitors hiding among us.
I was on the edge of my seat for most of this book. The author has created a complex mission with many moving parts and seamlessly woven them together to keep me, the reader, on my toes trying to figure out what would happen next. Her descriptions were vivid, and true to the time, putting me right into the heart of the action, from dark DC alleys to the marshy Lowlands of South Carolina.
I loved the intensity of the suspense, action, and intrigue in this book; Ferrell knows how to keep her readers on the edge and guessing. But I also loved the human face she put on these events, offering up fully developed characters who pulled me into their minds and their lives. The physical descriptions, voices (the accents made their voices so clear in my mind), unique capabilities, individual quirks (loved Sean's dictionary) and peeks into their hopes, fears, and dreams made it easy to become attached to them, feel my heart in my throat when things went sideways, and cheer them on when things went right.
TRACKED can be read on its own but I think you'll enjoy it even more if you read book one, SHANGHAIED first. Either way, you're in for a breath-stealing tale of espionage, suspense, and sweet romance but be prepared to not be able to put this one down until you reach the end. I finished it around 2:00 AM.
~~~~~~~~~~~
Do you enjoy WWII books?
Have you read any set in the U.S. prior to their entry into the war? 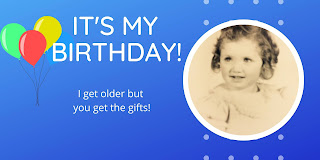 Birthday Giveaway #13
One randomly chosen person posting a comment before 11:00 PM, September 14 will receive a print book from my stash.
*U.S. only
*Must be 18
*Void where prohibited
Posted by pjpuppymom at 12:30 AM