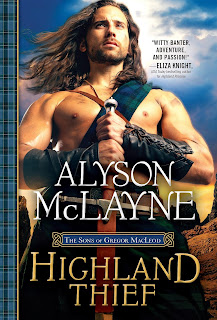 When a Highland laird decides to marry, nothing can stand in his way...not even the bride.

No one ever accused Kerr MacAlister of being a nice man. Everyone would agree, however, that when the laird makes a promise, nothing can stop him. Which is why everyone knows Isobel MacKinnon will end up his wife.

Isobel spent most of her childhood in love with the tall, dark, and sexy Scot. It wasn't until she was fifteen and failed to entice Kerr into kissing her that things turned sour. Now, Kerr is the one trying to entice her, but Isobel won't be swayed...no matter how tempting he might be.

Then Kerr discovers she may be eloping with someone else, and he has a choice to make―is this Highlander's fate to steal her away himself, to a place where both love and danger lurk, or let her go and face losing her forever?

I wanted to like this book. On the surface of what the book was about--an alpha male trying to get a reluctant heroine to marry him, a heroine he once spurned--I love a good redemptive story, don’t you? A band of brothers who were fostered together and now fight together? I’m in. A brawny hero who is mad for the heroine? Hand me the book now and walk away. When I read books for pleasure, I typically lean toward historical romances like this one--and there are authors over the years I’ve enjoyed their world-building of the Scottish Highlands, like Julie Garwood and Monica McCarty. And yet…

There were things that made it miss the mark for me. I heartily acknowledge I am a tad purist about certain settings and histories; I also concur I read a lot and as such my standard of what makes a “great book” versus “I cannot finish this” differs from other readers. To this day there is a Lisa Kleypas book I did not finish that everyone else loves and thought was perfect. Lisa. Kleypas, y’all. So I realize this is my lone opinion.

On the pro-side, McLayne’s writing style is very readable and engaging. The pacing, voice, and variance between dialogue and prose, et al, indicates very strong writing. Additionally the secondary characters were all likable, added the right amount of extra to scenes with the hero and heroine, and made me wish to possibly read their romance stories in their turn. (This book is the 5th in the series; and I have not read the others--and though the story can stand alone, I did think it might have behooved me to have read the other books first.) McLayne does a good job with the different kinds of tension in a romance story--whether sexual tension or suspense “is the bad guy going to get them?” tension. I very much liked all the fight/action scenes--those were excellent.

However, the “conflict” between Kerr and Isobel feels contrived rather than an organic sort of conflict/tension. My theory is that readers from previous books wanted to believe Kerr and Isobel were destined to be together at some point--and now it’s their book. But I’m reading it and it’s now the hero finally wants the heroine and the heroine wants the hero, so why is the heroine acting like a complete prat? In an effort to create or keep up conflict between these two characters, McLayne manufactures a plot to move the characters around, sufficiently motivating them perhaps, but making them both unlikable. The hero is frustrated and goes between “I want to kidnap her and force her to admit her love for me!” and “No, no, I’m a better person than that. She is her own person.” When he does the latter, he’s great; when he does the former, I want to stop reading. The heroine feels like she makes ridiculous choices that endanger her for no good reason; she seems irrational in her annoyance with the hero who is only trying to please her, even as she’s feeling sexual frustration from standing too close to the guy. Okay, that might be all romances--but for me, it felt like irrational behavior and hot/cold reactions from characters that I had trouble keeping engaged with as we went from one extreme to another. They come across as immature and as if any relationship between them would go up in flames, and not in the good way.

I grant you: no one is likable all the time. I also grant you: readers can be a little more harsh with female characters for being unlikable even if the men are--that’s true. But I spent a lot of time wanting to shake both the hero and the heroine for being idiotic twenty-somethings as if they were two bungling romance characters from Friends rather than medieval Scotland, when I more imagine that most twenty-somethings would likely have been married by then. It was the mixture of the forced conflict and the somewhat anachronistic nature of what I believe two people from this time period would have behaved that made me a bit crazed.

I would tell myself: this is fiction, Hellie. FICTION. Of course these characters are more enlightened (i.e. modern minded) than their probable counterparts. But it did no good. I kept being pulled out of the story for one reason or another--and to me, that is the real issue. For me as a reader, character trumps all; and I felt reading this book that the plot was forcing the characters to behave in ways that were inauthentic. To the story. To the setting. To themselves.

As a writer who finds writing one book to be challenging (read: near impossible), I imagine writing a cumulative plot across a series is a hundred-fold. I wonder if I had read the other books first and had gotten the same fervor for these particular characters as I imagine other readers are, if I would have allowed more leeway with how they were behaving--or maybe the other books would have shown the behavior of these characters to be in sync with how they normally were and I would have been more okay with it. But read alone, as someone who values character above all, this book did not meet my hopes or expectations. I do hope other readers who have been with the series all along enjoy it much more than I did and celebrate the Happily Ever After of Kerr and Isobel.

Readers, have you read any of the books in this series?

Who are some of your favorite authors writing in Medieval Scotland?

One person who comments on this post before 11:00 PM, September 19 will receive one book from PJ's home collection.