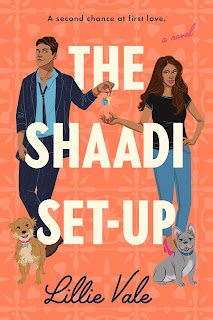 High school sweethearts Rita Chitniss and Milan Rao were the golden couple, until the day he broke her heart. Now, six years later, Rita has turned her passion for furniture restoration into a career and has an almost-perfect boyfriend, Neil. The last thing she needs is for Milan to re-enter her life, but that's exactly what happens when her mother, an unfailing believer in second chances, sets them up. Milan is just as charming, cocky, and confident as he was back in school. Only this time, he actually needs her business expertise, not her heart, to flip a hard-to-sell house for his realty agency.

While Rita begrudgingly agrees to help, she's not taking any risks. To prove she's definitely over him, she signs herself and Neil up on MyShaadi.com, a Desi matchmaking site famous for its success stories and trustworthy enough to convince everyone that she and Neil are the new and improved couple. Instead, she's shocked when MyShaadi's perfect match for her isn't Neil...it's Milan. Ignoring the website and her mother is one thing, but ignoring Milan proves much more difficult, especially when she promises to help him renovate the beach house of her dreams. And as the two of them dive deeper into work—and their pasts—Rita begins to wonder if maybe her match wasn't so wrong after all....

A very solid debut book with a charming hero, a relatable heroine, and a wily grandmother who I wished for myself, THE SHAADI SET-UP offers laughter, angst, and a little bit of philosophy as the heroine wrestles with the concept of “real love” and what it is and what it isn’t. This story offers up a diverse setting (read: non-white characters) with characters who aren’t suffering from the myriad of things that many times books featuring characters of color tend to do. Nope, these families are happy, healthy, and full of their own everyday drama that every family has, including a meddling grandmother. While there are some familiar tropes of the Indian community, the aunties and mothers conspiring for the perfect marriage, creating “meet-cutes” for their single children, there are more universal themes such as working through a marriage that is on the skids, creating a career for yourself that is both fulfilling and keeps you from living at home with your parents, and learning to communicate with all the loved ones in your life in a constructive way.

I had a few doubts in the beginning because the heroine is dating a guy named Neil. And it’s not because I thought, “Oh, she’s going to cheat on this ‘nice’ boyfriend and that will make her a terrible character.’ It was, ‘OMG, why is she with this guy? And for the love of god, why is she trying to match with him on the MyShaadi app?’ I mean, the author explains; the character seems sufficiently motivated, but this guy was terrible. He has so many red flags, he could have set up a flag store to become a multi-millionaire. I began to question the main character, who would frequently say things like, “He meant well” and “He’s a good guy.” He wasn’t; and you won’t convince me otherwise.

Fortunately by about mid-book, the heroine fixes this problem. But then I began to wonder if this story was one in which a “simple conversation” could fix all the problems. (If you’ve ever gone to a writer’s workshop, you’ll get this lecture about conflict about not making the conflict something that can be easily fixed by a conversation.) There were scenes where I wanted to shake the heroine...and then the hero. But all the while, I thought, this feels real and believable and I am still rooting for them to get together, and hey, isn’t the point of love stories about learning how to effectively communicate, to listen, to make yourself heard? So yeah, this story carried itself.

My minor concerns aside, I loved this book--and I couldn’t read it fast enough. The zippy banter between the characters, the slow burn and final “yes they’re doing it!” sexual tension, and the families playing their parts in various scenes, I just loved it all. I would frequently laugh or make this cackling squeal sound while reading, and my boyfriend would go, “What happened now?” and I’d tell him. (That’s how I know it’s a good book for me: how loudly I’m laughing or gasping in horror at what just happened. I get very wrapped up in the drama of it all.) I look forward to reading more books by this author; and I hope romance reader communities looking for more stories with people of color and/or other cultural identities will find this story believable and heartwarming. Of course, you don’t need to belong to one of these communities to enjoy the story--though there’s enough talk about delicious food that some Indian takeout while you read wouldn’t be amiss.

Do you find yourself drooling over food descriptions in the books you read? Searching Google to locate the nearest restaurant serving the dishes your book characters are enjoying?

Tell me about some of the books that have had your taste buds jumping for joy.

One person who posts a comment before 11:00 PM, September 4 will receive a print copy of The Shaadi Set-Up.

My thanks to G.P. Putnam's Sons for the giveaway!

*U.S. and Canada only