Review - - From Rags to Kisses and Birthday Giveaway #15 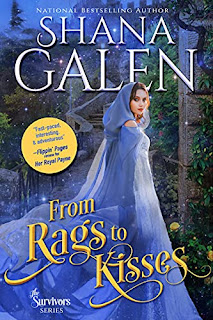 She’s poor as a church mouse.When young Jenny Tate stumbles over the beaten body of a boy in the streets of the London slums, her only intention is to rifle through his pockets. But the bruised lad charms her into helping him, and the next thing she knows, Aidan Sterling and she are fast friends, navigating life on the streets with all its dangers together. Jenny has learned never to trust or love anyone, but as the two grow up, they learn to rely on one other. And then Aidan betrays her in the worst way possible.He’s rich as a king.Aidan Sterling is one of the richest men in England. He has everything he wants and no one to share it with. After risking his life in the army, he returned to England and made a fortune. Now he keeps his loneliness at bay by focusing on what he’s good at—making money. And then Jenny Tate steps unexpectedly back into his life. He’s never forgotten her and never stopped loving her. Jenny hasn’t forgotten him either, and she hasn’t forgiven him. She’s betrothed to a viscount and has a new life and wants nothing to do with Aidan. But the discovery of an ancient trunk, a hunt for a street urchin, and the interference of homing pigeons might just be enough to bring these two back together.
PJ's Thoughts:
Shana Galen knocks it out of the park again with the latest installment in her The Survivors series. This second-chance, friends-to-lovers-to-enemies-to-lovers story reeled me right in and kept me flipping pages. I loved how Galen gave us insights into Jenny and Aidan as children and teens then separated them for ten years before bringing them back together as adults with life experience. It was instrumental in really understanding these characters, their experiences, their dreams, and their fears. There are unresolved feelings to be faced and amends to be made before they can move forward. But there are also moral dilemmas, divided loyalties, internal fears, and individual priorities that must be addressed before a happily ever after is even a possibility. Galen seamlessly weaves all of the threads together to create an emotional story for two people who were fated to be together, even if one of them is fighting it all the way.
I loved how Jenny remained her true, authentic self throughout the story, growing emotionally, gaining skills, and learning to move within the ton, without changing who she has always been at her core. I'm glad Aidan remained true to his promise to her when they were young, even if she was unaware. It told me that even though he's grown into an adult who is obsessed with making money, he remains at his core, a boy who cared deeply about the girl he left behind and a man who is willing to be better for the woman he loves.
A theme that runs through this series is chosen family and it's one of my most favorite aspects of the series. The members of Draven's unit who survived the war have created a family unit, by choice. A band of brothers that has expanded to include the wives and children who have been added along the way. And in this book, another smaller family is created. Fans of the series will be delighted to discover the happy outcome for street urchin, Harley while readers who start with this book will most likely be charmed by this heart-stealing little girl the same way I was. And then there's Jenny's mentor, the man who rescued her from the streets ten years ago, the man most likely to stand between Jenny and Aidan, but who, at great peril to himself and to the person he loves, took a different path. I adored him.
Readers should not be put off by the fact that this book is near the end of a long-running series. While a few characters from earlier books make appearances, From Rags to Kisses stands very well on its own.
Birthday Giveaway #15:
Do you enjoy a long-running series?
Have you been reading the books in this series?
Harley, the little girl in this book, has a sweet tooth. What's your favorite sweet treat?
One randomly chosen person who posts a comment before 11:00 PM, September 17 will receive a book from my home collection.
*U.S. only
*Must be 18
*Void where prohibited
Posted by pjpuppymom at 5:00 AM