Review - - The Inheritance and Birthday Giveaway #2 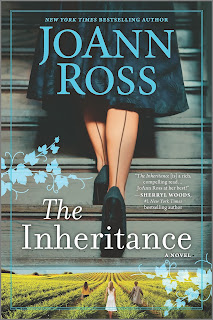 When conflict photographer Jackson Swann dies, he leaves behind a conflict of his own making when his three daughters, each born to a different mother, discover that they’re now responsible for the family’s Oregon vineyard—and for a family they didn’t ask for.After a successful career as a child TV star, Tess is, for the first time, suffering from a serious identity crisis, and grieving for the absent father she’s resented all her life.Charlotte, brought up to be a proper Southern wife, gave up her own career to support her husband's political ambitions. On the worst day of her life, she discovers her beloved father has died, she has two sisters she never knew about and her husband has fallen in love with another woman.Natalie, daughter of Jack’s longtime mistress, has always known about her half sisters, and has dreaded the day when Tess and Charlotte find out she’s the daughter their father kept.As the sisters reluctantly gather at the vineyard, they’re soon enchanted by the Swann family matriarch and namesake of Maison de Madeleine wines, whose stories of bravery in WWII France and love for a wounded American soldier will reveal the family legacy they've each inherited and change the course of all their lives.
PJ's Thoughts:
The Inheritance is a departure from the contemporary romance and romantic suspense novels usually written by JoAnn Ross. While this first women's fiction offering from Ross has romantic threads, it's primary focus is the journeys of the Swann matriarch and her three adult granddaughters.
Ross pulled me in from the beginning and kept me eagerly turning pages as secret after secret was revealed to and by the Swann women. Discovering your father has died is enough of a jolt but for two of the man's daughters, it's compounded by the knowledge that they have half-sisters, and a grandmother, they never knew existed. Oh, and also a vineyard and winery in Oregon that they now own. As you can imagine, it's a situation fraught with complications, tension, and complex feelings. Ross conveys all of this through the thoughts and actions of each of the women. I appreciated that she didn't offer up any easy resolutions but rather, allowed the story to play out with all the confusion, hurt feelings, and anger that was to be expected. It made the gradual acceptance more meaningful.
I was fascinated by Madeleine's stories of WWII, her strength and bravery, how it led her to her life in Oregon, and how the events of her youth perhaps influenced the actions of her son. I enjoyed how the stories were used to draw the women into the circle of the Swann family, revealing to them a heritage they had not known, strengthening their bonds to both the family and the land, and helping them take the first steps toward understanding - and perhaps forgiveness - for the father who left them behind.
I also enjoyed the fact that each of the granddaughters had an individual journey, a growth arc, and a new beginning as they also began to gel and move forward as sisters. Their stories were emotional, empowering, and, in some cases, romantic.
JoAnn Ross is a gifted storyteller regardless of the genre in which she's writing but I do hope she'll return to women's fiction again in the future. She has a voice well suited to this type of fiction.
Birthday Giveaway #2:
Do you enjoy dual-timeline stories?
Are you a wine drinker? What's your favorite kind?
One person who posts a comment before 11:00 PM, September 4 will receive a book from my stash.
*U.S. only
*Must be 18
*Void where prohibited
Posted by pjpuppymom at 12:30 AM