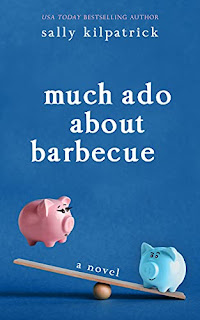 Return to Ellery, Tennessee for Sally Kilpatrick’s saucy new novel about two warring barbecue houses.Emma Sutton promised herself three things: she would never move back to Ellery, never work in the family barbecue restaurant, and never have anything to do with Ben Cates ever again. Losing her job and her home might’ve forced her to break the first two, but she’s determined to keep the third.Unlike Emma, Ben Cates has made peace with his hometown. He wants nothing more than to make his restaurant something his father couldn’t: a success. But between his hellraising little sister and Emma Sutton’s return to Ellery, his dream could easily be snatched away.Emma and Ben might’ve made each other’s childhood a living hell with their endless pranks, but the only way to finally get rid of the other is to win the coveted contract for Ellery’s annual barbecue festival. Seems easy enough—until attraction ignites like a charcoal flame, and happiness seeps in like a surprising new flavor.Can they find the courage to forgive bitter past mistakes and let trust into the mix, or will devastating secrets burn everything down again?
PJ's Thoughts:
I haven't read a Sally Kilpatrick book yet that I didn't enjoy. Her humor is infectious and her characters are authentic. I'm fully convinced that Emma, Ben, and their friends are somewhere in Tennessee perfecting their own varieties of barbecue and sides and having a darn good time doing it.
In Much Ado About Barbecue, Kilpatrick not only brings mouth-watering culinary delights but she fills her story with snappy banter, downhome advice, laugh-out-loud humor, and a depth of emotion that at times caught me off guard but enhanced my overall enjoyment of the book. Emma and Ben have a long history of antagonistic behavior toward one another. As the book progresses, the reason for that behavior is revealed, leading to truths uncovered and eventual healing, but not without some rocky obstacles to overcome first.
The cast of characters is large and diverse with each one having a purpose in moving the story and/or the main characters forward. Fans of the series will no doubt enjoy the appearance of Presley Cline, lead female character of Kilpatrick's Better Get to Livin'. Presley provides a conduit to a very important person from Emma's past.
One of my favorite secondary characters is Jeremiah. I love the adult relationship Emma and Jeremiah form; how he mentors her with his barbecue lessons that seem to always have hidden life lessons. Emma grows quite a bit in this book and a large part of the credit for that growth goes to Jeremiah.
Ben also has a significant growth arc. Kilpatrick skillfully guides both him and Emma through their reckoning with the past and into a brighter future, tackling deeply emotional obstacles, meddling relatives, fiercely contested barbecue competitions, collegiate film makers, and that pesky attraction with humor and heart.
If you love barbecue, if you love Southern literature, or if you just love a fun, fast, well-written story that will tickle your funny bone and warm your heart, don't miss Sally Kilpatrick's Much Ado About Barbecue.
~~~~~~~~~~
Q&A with Sally Kilpatrick

Hi Sally! Thanks for chatting with us today. Congratulations on the recent publication of Much Ado About Barbecue. What would you like readers to know about this book?

This is another one of my love letters to the South, especially West Tennessee. I love pulled pork barbecue, and I love Much Ado about Nothing. I wasn’t surprised when an idea for warring barbecue houses came to me. I got a little excited when Presley from Better Get to Livin’ walked through the door of The Flying Pig. (My characters sometimes surprise me) Most importantly, this was my pandemic book, the one that kept me sane. I hope others ultimately find it as fun to read as I did to write.

The characters portrayed in your Ellery series are so vividly depicted. Do they come to you fully formed? Have you based them on actual people you’ve encountered in your life or are they purely the creation of your fertile imagination?

I never intentionally base a character on someone I know, although Jeremiah has some shades of my father. These characters pop up and then run roughshod over me. I don’t have any control over them, as you can see above with Presley’s surprise appearance. They show up and show out as I write. I’ve been known to gasp and say, “Oh no you didn’t!” while writing.

I’m not ashamed to admit that I pretty much drooled through this entire book, along with looking up local barbecue joints and recipes for sides, so I have to ask: how much barbecue was consumed in the name of research for this book? Do you have a favorite kind? What about sides?

Barbecue was consumed before, during, and after writing this book, but I also read books and even took a class called Pork U. Lord have mercy, that was good eating. I am partial to pulled pork, but I like mine leaner than the average bear. I’ve learned to love brisket, too, but it’s harder to get right so I’m very picky about it. For both meat and sides, you can’t beat Sam’s BBQ-1 in Marietta, GA. I based Emma’s slaw and Ben’s beans on his side dishes. His mac and cheese is the best I’ve ever eaten, and that’s what I had in mind for Jazzy’s version. As for the chocolate pie, there’s a little French restaurant down in Decatur where they put a little cayenne in their chocolate gateau. That’s where I got the idea for the filling of Grammy Ruth and Shero’s pie. For Release Day I went to Sam’s, and I swear I’ve been planning that celebration since I started this book.

You’re one of the funniest people I know, both on the page and in real life. While you’re busy making the rest of us laugh, what brings joy and laughter to your life?

You are too kind! My family definitely brings me great joy and much laughter. People will tell me I’m funny, and I’ll think, “You should see the rest of this crew.” If we’d been born around the turn of the century, I think we would’ve been a Vaudeville act because the zingers fly around here. I also love reading, history, and travel. Ryan, my husband, has gotten me interested in old movies. I love the banter.

Do you have ideas brewing for future books? Any more Ellery characters waiting for their stories to be told?

I have more ideas than I can shake a stick at, but that means I have to decide which one. At the moment, I’m not planning on more Ellery novels, but there are some short stories still to be told, I think. I also have another super-secret book that’s being shopped around. We’ll see what happens there.

Where can readers connect with you online?

I spend entirely too much time on Twitter as @Superwritermom. I’m also at www.sallykilpatrick.com where I’m getting back into the habit of blogging. Finally, I’m learning Instagram where I’m also @superwritermom. (It should be noted that I am a mom and a writer, but the super was meant rather ironically)

Thanks for chatting today, Sally. Would you like to add anything or ask our readers a question?

Sally will be giving away two copies of Much Ado about Barbecue. Print available only to US residents, but e-copies to any who can read an epub or Kindle file. Winner’s choice!

Sally will also be giving away two e-book copies of Better Get to Livin' which features Presley (mentioned in the Q&A). You do not want to miss this one!

I have a signed, print copy of Better Get to Livin' for one randomly chosen person who posts a comment before 11:00 PM, September 9.