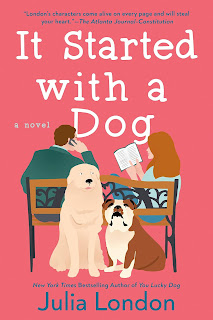 All Harper Thompson wants for Christmas is the huge promotion she's worked so hard for—which she should get, as long as her launch of the hip new coffeehouse, Deja Brew, goes according to plan. Jonah Rogers is trying to save his family's coffee shop, Lucky Star, from going out of business, which will be tough with the brand-new Deja Brew opening across the street. When Jonah and Harper meet for the first time after accidentally swapping phones, their chemistry is as electric as a strand of Christmas lights. He's a tall, handsome, compassionate hunk of engineer, and she's an entrepreneur whose zest for life is very sexy. They love all the same things, like scary movies, greasy food—and most of all, dogs. It's a match made in heaven...until Jonah finds out that Harper's the one about to put him out of business. Only one coffee shop likely can survive, and a competition of one-upmanship ensues in a battle of the brews. The paws really come out when the local rescue shelter has a fundraiser where local businesses foster dogs, and patrons vote with their dollars for their favorite pup. Harper takes in an adorable old bulldog on behalf of Deja Brew, while Jonah fosters a perky three-legged dachshund for Lucky Star. As the excitement builds for who will be crowned King Mutt and king of the coffee hill, Harper and Jonah must decide if their connection was all steam or if they are the perfect blend.
PJ's Thoughts:
I loved this book. It was exactly what I needed. Fresh, original, feel-good, and fun, it pulled me in and kept me entertained from start to finish. The characters were well developed and likable. I was invested not only in Harper's and Jonah's relationship but in their individual journeys as well. Jonah's family was frustrating, meddlesome, and adorably sweet and well-meaning. Watching them with Jonah, and later with Harper, really tugged my heartstrings.
I loved the set-up through the first few chapters, the initial attraction and intrigue as Jonah and Harper communicated via texts from the swapped phones and also uncovered details about one another via texts they received from others. There's a lot of humor in those chapters but also sweetness and the laying of a foundation with the potential to grow into more.
And then there are the dogs. I mean, who can resist those rescue dogs? Not this puppy! They all would have ended up going home with me. All of them. And they weren't just window dressing - although a grumpy old bulldog was quite the front window star - but were important characters in the story, adding additional incentive for self-reflection and evolution.
If you're looking for a feel-good contemporary romance that will make you laugh out loud, cheer for happy endings, and fall in love with both two-legged and four-legged characters, give It Started With a Dog by Julia London a try. It's one of my favorites written by this multi-talented author.
Have you ever adopted or fostered a rescue dog?
Do you have pets now? Tell me about them.
Birthday Giveaway #29:
One person who posts a comment before 11:00 PM, October 1 will receive one book from PJ's home collection.
*U.S. only
*Must be 18
*Void where prohibited
Posted by pjpuppymom at 6:00 AM