Gayle Trent writes the Daphne Martin Cake Decorating Mystery series for Bell Bridge Books. The second book in that series is Dead Pan. (See PJ's review here) Both Thorndike and the English publisher BBC Audiobooks will be releasing the first book in the series, Murder Takes the Cake, in large-print, hardcover format in the coming year.

Gayle also writes an embroidery series under the pseudonym Amanda Lee for NAL/Penguin. The first book in that series is due to be released in August of 2010. 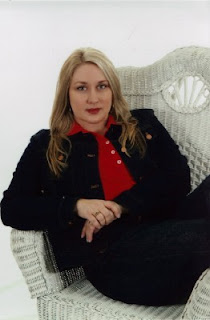 Thanks for being with us today, Gayle. Please tell us a bit about Dead Pan.

Dead Pan is the second book in the Daphne Martin Cake Decorating Mystery Series. When the book opens, a police officer is questioning Daphne about a cake she took to the Brea Ridge Pharmaceutical Company Christmas party. Many people at the party got sick, but most recovered after being treated with a vaccine manufactured by the company. Only one, Fred Duncan, went into a coma and died. Coincidence? Or did somebody have it in for Fred?

What would you like to overhear people saying about your book?

"I laughed so hard when--" A local book club selected Murder Takes the Cake as one of their books; and when I attended the meeting, I was delighted to hear that they thought this or that part was funny. I also love it when people say, "I never guessed ______ was the villain." Also, there was a review where a woman said she loved the main character's relationships with various members of her family--that they were beautifully or realistically drawn. I felt like, "Oooh, she got it!" Actually, I'll take anything that's not negative. :-)

What inspired you to write Dead Pan?

I was reading an article in Wired magazine about clinical drug tests. I did some further investigation, and I came across some fascinating stuff.

What do you advise new writers to do? 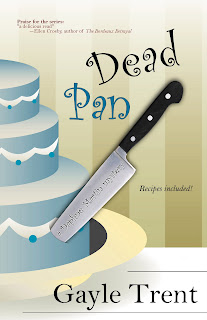 Read the genre they're interested in writing. For instance, when my agent pitched my first three chapters of the embroidery mystery to the editor, the editor said she liked it but didn't love it. I needed to revise it to make her love it in order for her to buy the book. I asked my agent who the editor had published recently. With two names in hand, I went to the bookstore and bought the two books. I read them and found they were more descriptive than my own books. I went back, added more description and gave the heroine a bit more spunk, and the book sold. Sometimes you have to be flexible.

What exactly is a cozy mystery?

Cozy mysteries usually take place in a small community and involve a relatively small number of people. The reader knows that someone within the intimate group will turn out to be the killer. Think Desperate Housewives with one of the cast turning out to be the killer as opposed to Criminal Minds or CSI. Cozy mysteries also feature an amateur sleuth as opposed to a professional detective, and the heroine has an interesting profession or hobby.

Gayle, thanks again for dishing with us today. For more information about Gayle and her books, check out her website.